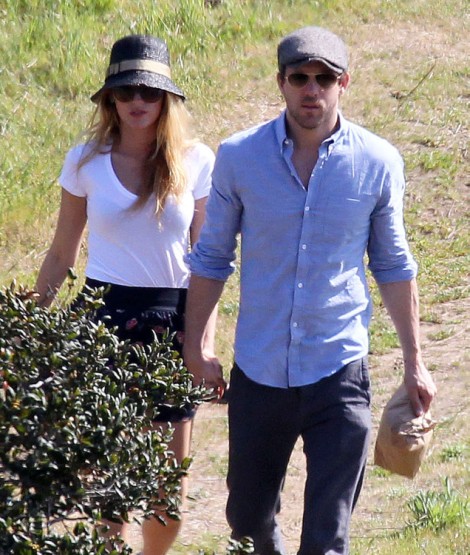 Where in the world have you been Blake Lively? It seems like forever since the Gossip Girl left Leonardo DiCaprio crying in the dust before going off to marry Ryan Reynolds in the (not so surprising) surprise wedding of the year last September. Is that weird to anyone else that Ryan married both Scarlett Johansson and Blake in September? How did I just now realize that? Anyway, so Blake and Ryan have remained super private since their intimate wedding. We thought we might get some fun photos out of them in their Martha Stewart Weddings feature but even that was a disappointing bust. So what gives? Are they just too happy in their marital bliss to be bothered with us? Or are they just doing too much… camping?

Star magazine has a ridiculous story this week about how Ryan is alienating his new young wife with all of his outdoor time. He keeps taking the poor girl on camping trips and she’s starting to wonder where all the fun and excitement went in their marriage. They’ve been married for six months now? Ya, those feelings start to come in around that time. Just kidding! No, not really.

But Star couldn’t leave the story there. Oh, no it appears that camping was one of the problems in the Ryan Reynolds/Scarlett Johansson marriage as well. I think the great outdoors was the least of their problems but I guess Ryan is refusing to learn from his mistakes! Well, what do you expect from the guy who’s been engaged like four times and likes his women young? When you divorce a young, hot Hollywood blond who can blame you for marrying another young, hot Hollywood blond? Lessons be damned!

This story is asinine but funny. If anything I bet Blake loves camping. She just seems like a girl game for everything. Scarlett… not so much. But still, all that camping might have done us some good. Blake has finally been out in public making the rounds as the new face of Gucci’s perfume. She’s probably glad to get that woodsy smell off her!

Do you think the Blake Lively/Ryan Reynolds marriage is on the rocks after so little time or does the couple seem as strong as ever especially since they’re staying out of the limelight?