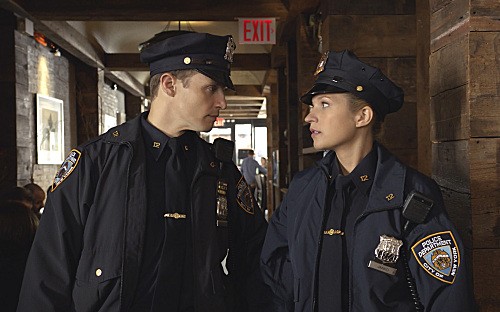 Tonight on CBS Blue Bloods continues with a new episode called, “Justice Served.” On tonight’s episode as per the CBS synopsis, “Danny is called for jury duty, and winds up being the sole dissenting opinion in a murder trial.”

Blue Bloods“Justice Served” airs tonight at 10:00pm ET and we will be live blogging all the details. So don’t forget to come back and refresh your screen often for live updates.

Jamie and his partner Jenko had just made a big bust. While Jamie was happy he noticed his partner wasn’t. She knew they’d be caught up in paperwork and she was excited for her date later that night. So taking pity, he gives her the night off to enjoy herself. However the date didn’t go as planned. The seemingly nice guy she met at yoga was pushy. Even though he was pushy she still allowed him to be gentlemen and walk her to the door. When he didn’t get invited he pushed himself in. He attacked Jenko and her first response is to cover it up. She calls in sick the next day all the while shutting herself in at her apartment.

Things get worse for the Reagan family. Jamie’s partner may have gone MIA but Frank could have been set up. He went to dinner with an childhood friend. They ate and enjoyed themselves ending with a good night. But moments after Frank left, his fiend mob lawyer Angelo Gallo was shot. Someone had waited until they knew Gallo was meeting Frank to plan the shooting.

Frank wants Gallo to cooperate with the investigation but he refuses to be a rat. However the police already know he abruptly dropped a case not too long ago. Could the shooting be retribution?

Then there is Danny. He was put on a jury to what should have been a simple case. An eye witness and DNA all proved Shaun Williams was at the scene of crime when a clerk was killed. He has a second rate attorney and would have most likely gone to jail if not for Danny. Danny was the only person who believed he didn’t do it. He was trying to convince the rest of the jury when he accidentally lost his temper. He got into an argument with another juror and all of it had to be reported to the Judge.

Danny wished he was still on the jury because now that he’s dismissed he can’t help the kid. Luckily his chief wants him to redeem himself. He had over the evidence to Danny telling him he should solve the case. Easier said than done. The suspect is argumentative and not necessarily helpful to his own defense. Although he did help Danny by implying the “eye-witness” is lying for a reason.

Jenko is back on the job. She excused her bruises by saying she was in a car accident but Jamie doesn’t believe. He also notices how quiet she’s been and how she keeping ignoring whoever was calling her. He looks to see who it was and realized it was her date. After checking into the guy he soon learned Jake had a record. He was charged with rape earlier. Unfortunately the charges were dropped.

Jamie had asked his dad for advice. He wants to help out a friend but he doesn’t want to push too hard. Frank couldn’t help him when he’s having the same problem. Jamie did get Jenko to open up. She was beaten up but luckily was able to lock herself in the bathroom before she could be further hurt. Jamie admitted he looked into the guy and she shut down on him. She doesn’t want him interfering.

He later found her trying to follow Jake. She had planned on serving her own justice but Jamie was able to stop her. He didn’t want her to risk her career over this. He told her she had to report it and he’ll be there with her every step of the way. And he was. He went with her to arrest good ole Jake.

Frank got his friend to turn informant. He appealed to the man’s better side. The one that wants to be alive in order to walk his daughter down the aisle. This way Angelo could be safe and the people he’s helping to put away will never know it was him that told the cops everything. As an added insurance, Frank has Angelo arrested for obstruction.
The “eye-witness” is actually a prime suspect. Her boyfriend was seeing the clerk behind her back. It seems she confronted the girl when she was high. One thing lead to another and the clerk died. She stopped at a full confession though. At that point she was smart enough to ask for a lawyer.

The man she accused would have gone to jail if it were not for Danny. His own lawyer tried to talk him into taking a plea deal. No one believed him except one cop and for that alone he’s going to forever be grateful.

Three people got reclaim their lives simply by having a Reagan go to bat for them.