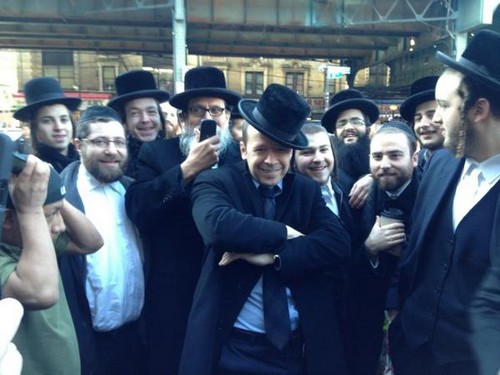 On last week’s show when a man with multiple rat bites was thrown from a moving car, Danny worked the case to find out why and who was trying to send a message. Meanwhile, Frank had to be diplomatic when dealing with a bigoted radio host who would be broadcasting from New York City.

On tonight’s show before a Hasidic Grand Rebbe passes away, he chooses his youngest son to succeed him. But when the new appointee dies suddenly, Danny investigates the oldest son and others within the Hasidic community. Meanwhile, Henry reveals a family secret to Frank.

The CBS team filmed the show at  Krausz Hatters in Borough Park in NYC.  Donny Wahlberg thanked the Hasidic Community for letting them film on his twitter account.  He tweeted, “Thanks to the Hasidic community in Borough Park for welcoming Blue Bloods to shoot today! “toda raba””

Blue Bloods “Men in Black” airs tonight at 10:00pm ET and we will be live blogging all the details. So don’t forget to come back and refresh your screen often for live updates. While you wait for the show – check out the sneak peek video of tonight’s episode below and let us know what you think of the season 3, so far!

Recap: Henry is visiting an old friend, Soliman Morgenthal, that he has had for 30 years who is dying. He tells Henry that he has to sons, Jacob should succeed him but in his heart, Levi is best.

Jamie and Vinnie are on patrol when they see two girls in a park smoking weed and they approach the girls and ask them for id. One of the girls, Rebecca, tells Jamie that he doesn’t know who her father is and calls him a clown.

Sully is dead and Henry is at the funeral, all of a sudden there is screaming and Levi has been stabbed to death. Danny is on the scene and a Hasidic detective Landsman shows up on the scene to help him because the community doesn’t accept outsiders.

Levi called his wife just before he was murdered, he was really upset about his father’s death.

Henry goes over to see Frank because he is very upset about his friend and his friend’s son being dead.

Danny is at the synagogue and questions Jacob, he asks him how he feels that his father wanted Levi taking his place and not him. Landsman thinks Danny is pushing too far. At the station, they find footage of a guy named Ben from the synagogue who exited Soliman’s funeral just after Levi, could this be their guy?

Frank is with the mayor and Garrett, they have a quick chat and then the mayor reveals why he is really there. His daughter Rebecca was caught smoking weed in the park and he wants him to talk to the arresting officer, his son Jamie.

Danny is back at the synagogue to see Ben, he tells him that he saw the footage and Ben calls all cops the same, stupid. Landsman has to take Ben by force, this guy just wants to give them trouble. Ben is nasty, he just doesn’t want to cooperate at the station and Landsman gives it a try because Danny is frustrated.

Frank is sharing a meal with Jamie when he asks him about arresting Rebecca. Jamie tells him that she is a real piece of work and he has had gang bangers that treat him with more respect.

It turns out that Levi may have had a girlfriend and Danny goes to ask Asher who was closer to Levi than anyone else – he gives up the girl’s name. After a quick chat with her, she reveals that they were in love and she wanted him to move in with her, but Levi told her that he would never betray his people or his father’s will. Danny asks if she had sex with Levi the morning that he was killed and she says yes, he was upset because his wife wanted a divorce and the only way a woman can get out of a Hasidic marriage is if her husband dies.

They interview Levi’s ex-wife and she reveals that she could never please her husband, she wanted children but he would never be with her intimately. The lab has identified an animal hair on Levi’s jacket.

The mayor is at lunch with Erin and she tells him that Rebecca’s real problem is that she was rude and disrespectful to the arresting officers. She tells him a story about when she was young and got into a mess, Frank made her clean it up herself.

McElroy, Landsman and Danny go to visit Moisha, the hat maker because he ordered a hat just before he died.

Henry is with Frank and decides to tell him a family secret, he had an older brother, Peter Christopher Reagan who died of leukemia at eighteen months old, Frank was born the year later and they didn’t want Frank missing someone he never knew.

Rebecca is in court with her dad and she still has a bad attitude, but this time with the judge. Rebecca’s father, the mayor requests to speak in the courtroom and tells the judge that his daughter needs to respect the law. The judge agrees and gives her a fine and a thousand hours of community service, she is shocked.

At Sunday dinner, Jacob sent over lots of Hasidic food for the family to share.  After dinner, Henry asks Frank if he is mad at him and he tells him no, he goes on to say that he is sorry that they lost their son. Henry goes into his wallet and pulls out a picture of Frank’s brother, he gives it to him and tells him that he was a good kid just like him.