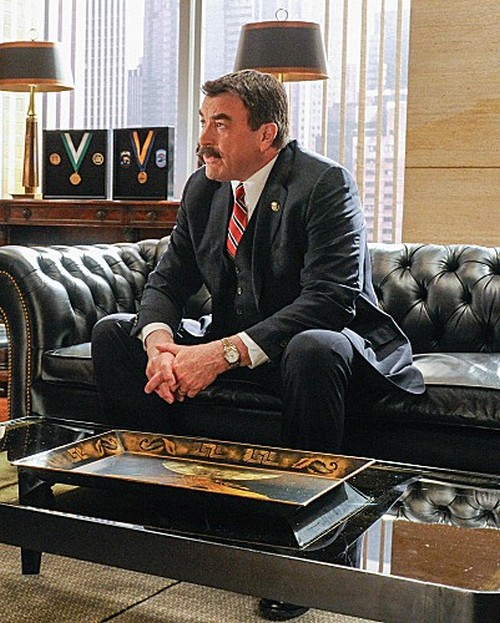 Tonight on CBS BLUE BLOOD returns with a whole new episode called “Protest Too Much.” On tonight’s episode Frank considers getting romantically involved with a woman from the ACLU who happens to be Erin’s acquaintance. Did you watch last week’s episode? We did and we recapped it for you.

On last week’s show Erin and Danny investigate a cold case of a girl who was attacked by her rich and powerful boyfriend, who was never convicted. Meanwhile, Jamie’s friend brings a lawsuit against Danny’s friend after an injury at a pick-up basketball game.

On tonight’s show Danny’s latest case involves a pair of “Bonnie and Clyde” bank robbers.  When an off-duty cop tries to stop a bank robbery, he is disarmed by the “Bonnie and Clyde” robbers who take his gun and wound an innocent bystander. Meanwhile, Frank considers getting romantically involved with a woman from the ACLU who happens to be Erin’s acquaintance.

Blue Bloods “Protest Too Much” airs tonight at 10:00pm ET and we will be live blogging all the details. So don’t forget to come back and refresh your screen often for live updates. While you wait for the show – check out the sneak peek video of tonight’s episode below and let us know what you think of the season 3, so far!

RECAP: Frank meets with an old acquaintance of Erin’s, Whitney, from the ACLU. At the bank, there is a hold up and the gun man shoots one person in the leg and his girlfriend is shocked – they run out of the bank with money. Danny is on the scene with Diaz, there was a cop on the scene and he is embarrassed that his gun was taken by the bank robber.

Danny is at lunch with Diaz and they join the feds who think the bank robber was alone, but Danny sets them straight that he was with a girl, there are two people involved in the attempted bank robbery.

Franks gets into a screaming match with Whitney from the ACLU in the elevator.

Danny is still trying to find the bank robber, he keeps digging into other unsolved cases and tries to map them together.

Erin is shopping with  a witness, she wants to buy her a suit to wear in court. Meanwhile, there is a photographer outside taking pictures of Erin, it’s for the police accountability website. Erin grabs the camera and destroys the film, the guy runs into the store and starts taking photos of her witness, Erin is furious.

Danny finds out that the girl who was with the bank robber is Sylvie Freeland, she worked as a teller at the bank. Diaz doesn’t understand why Sylvie would have been involved. Danny and Diaz are at an apartment, they are looking for Sylvie, but she moved out three months ago. The girl tells them she had $100,000 in student loans and she was depressed. Danny shows her picture of Sylvie and a guy, his name is Dillon and she didn’t even think he was in to her.

Danny is on the phone with Dillon’s mom, he get’s his address by lying to his mom about a job offer. Dillon is staying at his uncle’s Mike’s in Brooklyn, Danny and Diaz are on their way.

Erin and her witness, Jana, are together and talking about the guy who took the pictures. Jana is upset, she doesn’t want to go through with it because she thinks the prosecution is going to make it look like she asked for it. Erin agrees that could happen, but Jana could put the guy behind bars. Jana walks out.

Danny, Diaz and a uniformed officer are at Dillon’s uncle’s house, it appears that Dillon and Sylvie are at a party. Danny and Diaz search their bedroom, their bags are packed, looks like they are ready to leave at a moment’s notice. Danny finds some photos, it looks like Dillon and Diaz are trying to look like Bonnie & Clyde. Danny finds an ad, it looks like the two are not at a party, they are preparing for another hold up, this time at a club.

The guy who took the pictures of Erin did a story and there are pics of Frank and Whitney, Erin is surprised to see them together enjoying a meal in the photo.

Danny and Diaz arrive at the club, there are gun shots. Dillon and Sylvie have taken a hostage and a cash box.

Frank is with Erin, she tells him that she has seen the photo of him and Whitney and wants to know what is going on. Frank tells her that Whitney is trying to forge a relationship with the ACLU and NYPD. Erin doesn’t want Frank seeing Whitney because she is the same age as her, he basically tells her that it is his business.

Danny is at the station, Diaz called the feds because they have a witness, the hostage who tells them that the robbers are nice, the girl especially wanted them to know the shooting was an accident.

Danny has Sylvie in custody, she claims they were making a statement about the banks crimes. Danny tells her that her boyfriend is a bad guy and ruining her life. Danny tells her she has options and he wants her to help him find Dillon to save herself. He tells her to trust him, she wants it to be him that finds Dillon and not another cop. The feds arrive just as Sylvie was going to tell Danny where Dillon is, then she changed her mind and says she wants to be exercise her right to remain silent and she wants a lawyer.

Erin is at home and tells Jamie that there is a slim possibility that Frank is dating Whitney, Frank doesn’t care and says its not his business. Ar dinner, Frank is going at his food like it is going to escape, he is upset that the case went south because of the feds. Nicki thinks the whole Bonnie & Clyde thing is endearing. Frank’s going for a drink with Whitney comes up and he says he’s no spring chicken but he’s not dead.

Erin’s witness showed up at court after all and promises to do the best she can.

The FBI has cut Diaz and Danny out of the loop, Dillon is on the run, he just hijacked a car. Danny and Diaz are quick, they get into a speeding chase after Dillon and they get him to stop. Danny tries to talk him down,he wants him to toss the gun out and the thing peacefully. Dillon fires, Danny and a bunch of officers shoot back in defence, but Dillon is dead, he got his Bonnie and Clyde ending.

Frank is at lunch, Whitney walks in and he tells her that Erin knows they had a drink. Frank basically tells her that they cannot have a relationship because she is friends with his daughter.