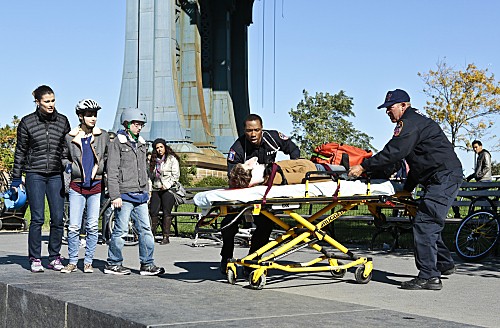 Tonight on CBS BLUE BLOOD returns after almost a one month hiatus with its Winter Season premiere.  Tonight’s episode is called “Fathers and Sons” and on tonight’s show Danny’s son Sean heads to the hospital with a serious injury.

On the last show before the hiatus Danny and Kate come up empty-handed with leads for a shooting, Linda helped make a break in the case when she overheard the victim telling his priest who was responsible. Meanwhile, Henry was mugged at an ATM, which sent Jamie into a rage as he tried to track down the assailant.  Chazz Palminteri (“The Sopranos”) guest stared as Angelo Gallo, the city’s top mob lawyer, who had a meeting with Frank, and John Ventimiglia (“The Sopranos”) guest stared as the Organized Crime Control Bureau Chief.

On tonight’s show when a radical environmentalist sends a message to motorists, Danny and Kate are put on the case. Meanwhile, a bicycle accident sends Danny’s son Sean to the hospital with a serious injury.

Blue Bloods “Fathers and Sons” airs tonight at 10:00pm ET and we will be live blogging all the details. So don’t forget to come back and refresh your screen often for live updates. While you wait for the show – check out the sneak peek video of tonight’s episode below and let us know what you think of the season 10, so far!

Recap: Sarge gives Danny and Kate a heads up of a huge car accident – it turns out that two eye witnesses to the accident say that the victim fell asleep at the wheel. The cop on the scene is surprised to see the detectives show up at the car accident, not a usual place for them. Danny discovers that the victim was shot in the head.

Frank is going to hold a press conference to alert the public about the shooting.

Erin is out bike riding with the kids when Sean is run into by another biker. The ambulance has arrived and they are putting a neck brace on Sean then taking him to the hospital.

At the station, Danny shows the team the two victims and they are trying to find a link to the locations but there isn’t any. Danny tells Sarge that he had the trash cans pulled and finds a bag from an organic restaurant that he believes belongs to the shooter because the bag is found in both trash bins near where both victims were found. Danny gets a call that Sean has been hurt.

The mayor doesn’t want Frank to do the press conference; he thinks he is going to cause a panic in the city by making them believe that they have a serial sniper on the loose.

Danny is at the hospital and finds out that Sean has suffered brain trauma, it is swelling and causing pressure. He is in and out of consciousness and they won’t know anything else until the swelling goes down. There is no treatment, they just have to wait it out and give it some time.

Jamie is on the phone with Frank, he can’t get away and tells him to convey to Frank and Linda that he is thinking about them. Garrett doesn’t want Frank to hold the press conference because the mayor doesn’t want him to, but Frank tells him directly that the mayor is not in charge here.

The mayor is upset with Frank for going public and tells him that he violated a direct order.

Kate calls Danny, she has reached a dead end in the investigation – Danny tells her that he is taking some personal time given the circumstances. Meanwhile, at the hospital there is no change in Sean and Danny is really frustrated while Linda is calmer about the whole situation. When Danny starts to get “really” frustrated, Linda tells him that it would be best if he just goes and works on the case.

Erin is upset, she wonders if Danny will ever forgive her for Sean getting hurt while she was watching him.

Danny is still at the hospital and he is taking his frustrations out on a cola machine when Erin walks in. Danny thanks Erin for being with Sean when he was hurt and she tells him she wishes she could have done more.

Danny gets an update on the case, the ammo was environmentally friendly and a guy, Peter Wesley bought a ton of stuff before the company when out of business. Linda convinces Danny to get back on the case.

Danny and Kate storm into Peter Wesley’s studio with a team of offices, guns drawn and find out that the guy is an artist and used the ammo to glue to a painting.

Dannny and Kate go to see Mr. Leaf, he is in charge of one of the “green” groups in the city and Danny gets really irritated with him and shakes him up a bit. Mr. Leaf finally gives some info and says he met this military guy at a rally and he threatened to do something just like this, he gives Danny and Kate a photo of him from one of the rallies.

The Department of Defence has come up with a name to match the picture, it is Matt Hinkle. Danny and Kate are on it and when they finally get to him, they find him dead, he shot himself in the head.

This whole thing bothers Danny, he thinks this may not be a suicide after all. It turns out that Richard Leaf was the killer, he set up Hinkle in the hopes of diverting the attention away from him.

The mayor tells Frank that he is very proud of him and he is sorry for being so rough on him lately.

Frank heads of to Joseph’s grave by himself.

Danny is at the hospital and alone with Sean in his room and talks to him in the hopes of getting him to wake up. He then looks up and speaks to Joe, he tells him to knock on somebody’s door and put in a good word. Frank just arrived, he head the whole thing and walks up to Danny and puts his hand on his shoulder for support then goes to sit in the chair beside the bed.

The next day, Danny is asleep in the bed beside Sean, Frank still in the chair when Sean finally wakes up.

Later, Danny goes to visit Joe’s gave and thanks him.