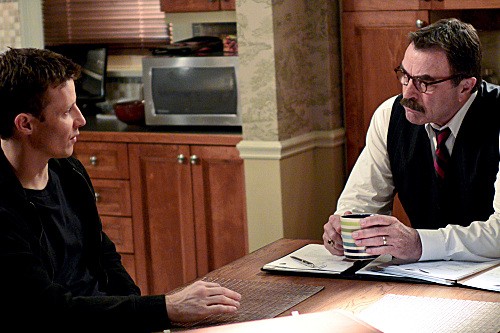 On episode 6 of BLUE BOODS called, “Growing Boys,” Danny enters his home and is having a one on one dinner tonight with his wife since the kids are out; Danny gets a call and Marianne is yelling for him saying that somebody has gone insane. Danny then leaves after kissing his wife goodbye. Jaime is playing basketball and these guys come in saying they want to see his friend Thomas. Jaime tells them to get lost because it’s only for people in the program, they tell Thomas to leave now but he tells them he will come later. Jaime stares the guy down and the two gang bangers leave.

Danny goes to see Marianne about her abusive boyfriend named Joe, he tells her next time he gets a call he will arrest him. Thomas tells Jaime to stay away from his friends from before. Danny goes back home and his wife is leaving now having to take over someones shift; she owes a friend, she starts telling Danny to get Marianne to call the police. Danny agrees and is very frustrated with having to help her so often. Jaime leaves the basketball gym and gets in his car; Thomas runs out of the gym and the other guys are chasing him. Thomas leaps the fence and Jaime gets out following after them. Jaime is chasing down the kids who are running for Thomas, one of the kids gets hit by a car, Jaime then calls 911. The guy is non-responsive.

Frank gets information that the kid hit by the car is probably paralyzed from the waste down, the gang bangers are saying Jaime never mentioned he was a cop trying to get him in trouble but Thomas did make it clear that Jaime did mention he was an officer. Frank then asks to move on from this, Frank is getting problems with the basket ball group helping kids to get out of gangs; the kids part of the program are getting in too much trouble with their old crews.

Danny is at the gym and a guy asks him where he’s going and Danny says he’s looking for Joe; Danny meets up with Joe who is training a football player. Joe gives him a hand shake and he mentions how Joe bruised Marie; Joe says it was an accident that they worked out. Danny tells him if it happens again he will go on duty and will become a problem; Joe tells him that it’s no longer high school and that he should back off. Joe says Mary is his and that he should stop nagging him. Jaime meets up with Erin and mentions about his case; they talk about how he is being told that he may get into a problem with the kid saying he’s didn’t mention he was a cop. Baez and Danny are talking about his call in about Joe at the gym, Danny says he’s got a bad feeling about the guy and wants him to be looked into. Danny asks why people are sitting on Joe, it’s mentioned he might have illegal steroids; they believe he gave steroids to a kid who died of a heart attack from steroids. Baez mentions sending a girl to be undercover in his gym would work very well and even offers to take the job.

Kelly walks in to see Frank, he tells her to take a seat. Kelly mentions that the events of Jaime chasing the kids had the car hit him; the city council believe that it could be the basketball program that was started. Kelly belives they should cancel the program, Frank says that if there is a hcance to not have the kids stay out of gangs then what he’s doing isn’t wrong; it’s worth it to him to save the kids. Kelly asks what happens when a kid gets kill, Frank says that sadly kids do die and tells Kelly to not go up against him on this issue.

Jaime is telling a group of individuals about what happened on the night of the accident, the guys then questions his decision and how his old partner died in that area; Jaime says that he does not care about what the guy believes whatsoever. Baez is at the gym right now and is asked about her work out goals, she says that she just wants to have a good body to look great at a friends wedding. Baez comes back to Danny and mentions that she is now inside. Thomas now tells the same people about what happened that night, he says he didn’t hear Jaime saying that he stated that he was a police officer; he heard the word police but had no idea who said it because he was running. Jaime goes to talk to Thomas and questions about how he changed his story, Thomas mentions that there is some money involved. Thomas says he doesn’t know who he is, Jaime tells him it’s good for him fooling him and walks away pissed off.

Danny gets home and brings flowers home to his wife as an apology for having to leave last night, he offers to bring her out to dinner. Danny goes to put water in a vase for the flowers, someone is honking their horn out side and it’s Marie-anne. Danny went to Joe’s gym and the guys pissed off at her now; she said that she didn’t want him to go and talked to him. Danny’s wife tells her to get the hell out of here and that he wont help her no more; he takes her phone and deletes Danny’s number.

Baez is at the gym doing her undercover work, she is telling the trainer she has how she’s really inspired now. She mentions that she feels really tired every night and wonders if there’s a way to help her get more energy; she asks for a drug called Mexican Dragon. Jaime finds Thomas’s mom, she asks Jaime to help him because he did change his testimony for him. Thomas is now in the hospital and is hurt really bad, Jamie tells him that he’s going to step up for Thomas now and really appreciates what happened. Jamie offers to buy him something to eat.

Danny is sitting outside watching Baez on a fake date with her own trainer, he mentions having been certified as trainer. Baez asks about the Mexican Dragon, he tells her that he’s wondering if he’s talking to a cop; she calls him a bastard and walks off. The guy comes over and now she’s telling him she is insulted by the idea, she says they can start over and repeats she is not a cop but a detective. Danny comes out and arrests the trainer.

Frank asks Jaime what’s up, Jaimesays that he is greatful for his father and realises that kids can end up into a lot of trouble without one. He mentions how Thomas changed his testimony, Jamie says they owe Thomas and that they should find a way to move him away. Frank says that you can’t save every puppy in the pound, Baez is now interrogating the trainer and got nowhere. Danny says that the trainer will have to sit in the room till morning wakes him up; a big scary guy says that he’s going to be placed in the room as well; the guy sits beside him and says he’s named tiny. Tiny says he smells chicken, he tells the trainer that he will be his date tonight; Tiny starts touching him weirdly. The trainer is now calling for her and she comes in and asks to go somewhere and talk. Baez unlocks him and takes him somewhere else, Danny says Tiny did great and willl see him later as he was a detective. Frank is out to dinner with Kelly, he tells her that the NYPD is unique; he believes that his supporters won’t be happy. Frank says he’s going to expand his program to find relocation options for kids who want to get away from the gangs, he tells her to expect the unexpected. Kelly says that she does not agree with it at all. Danny makes a call to Mari-anne and they have a warrant to arrest him,Danny is now driving over to her house; Joe arrives and is pissed. Danny goes over to Joe that they need to tal, Joe runs out of the house and down the street. Danny is chasing Joe, Danny tells him to stop but Joe keeps running. Danny jumps Joe and cuffs him.

If you can’t wait till next week’s Season 4 Episode 7, “Drawing Dead,” we have the synopsis and a sneak peek video below for your enjoyment!

CBS Official synopsis: “When an officer is accused of using excessive force on a suspect, Frank finds his department under scrutiny from the community and the mayor. Meanwhile, Danny and Baez investigate the murder of a Wall Street securities trader who was deep in debt due to a gambling addition”