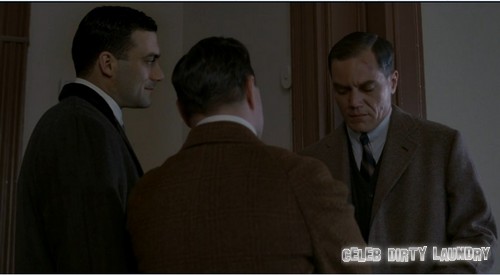 Tonight on HBO, what I consider one of the best television show today BOARDWALK EMPIRE continues with another new episode called, “All In.”  On tonight’s show Chalky is intrigued by Daughter Maitland’s presence. Dunn Purnsley goes to Harlem, and is courted by Valentin Narcisse.   Did you see last week’s episode 3?  If you want to catch up before tonight’s show you can read our full and detailed recap right here of last week’s episode 2 right here!

On last week’s episode Nucky had reservations about investing in a Tampa land deal engineered by transplanted bootlegger Bill McCoy. While there, he met speakeasy owner Sally Wheet and questioned her about Bill. Valentin Narcisse booked a sexy jazz singer, Daughter Maitland, to perform at the Onyx, and gauged Dunn Purnsley’s allegiance to Chalky. Willie, Eli’s son, turned to Mickey Doyle and his bootleg warehouse to elevate his social standing at college.

On tonight’s show Nucky gets to know Arnold Rothstein over a card game, and sizes up an unexpected partner for his Tampa land deal. A newly promoted Eddie Kessler gets detoured after making a train-station delivery. When one of their collectors is incapacitated, Al and Frank Capone decide to finish his route, enlisting a reluctant Van Alden to tag along. Agent Knox fills Hoover in on the Thompson operation, vowing to exploit Nucky’s weakest link. Chalky is intrigued by Daughter Maitland’s presence. Dunn Purnsley goes to Harlem, and is courted by Valentin Narcisse. Willie and his college roommate, Clayton, carry a practical joke too far.

Tonight’s episode is going to be another action packed one, which you won’t want to miss. So be sure to tune in for our live coverage of HBO’s Boardwalk Empire Season 4 episode 4— tonight at 9PM EST! While you wait for our recap, if you cannot wait for tonight, check out a sneak peek video of tonight’s episode below!

Tonight’s show opens in Chicago and Jake barely makes it up the stairs, he is a collector for Al Capone.  He gets money from a man he is collecting from and falls down the stairs.

Agent Knox has a map on the wall and he is complaining to Edgar Hoover all the members of Nucky’s criminal organization.  He shows Edgar all the towns that are being run by organized crime.  He promises Edgar he will find the weakest link in Nucky’s organization and break it.

Nucky asks Eddie Kessler for a sandwich but now that he is promoted he is having someone else take care of Nucky.

Eddie is now taking care of getting and giving money for Nucky and he is so earnest about it.

Over at Babette’s Daughter Maitland is practicing, Chalky looks on.  She asks him if he is enjoying the show, he responds he has no complaints.  She is not thrilled he did not compliment her.

Dunn talks to Chalky and tells him his mother is sick.  He tells Nucky he will be back from Baltimore in two days.

Dean O’Banion, is with Van Alden and Dean is practicing his shooting.  He plays a gag on the man he was shooting with and the man gets hurt.  One of his men comes in and tells him that Al Capone’s man is in the hospital he had a bad ticker.

O’Banion tells Van Alden to make up a bunch of day old daisies and run them over to the hospital to Capone’s sick collector.

Elii comes to his son and gives him his laundry and tells him to thank his mother.  Eli wants to know what is wrong with his son.  His son tells him everyone is stuck up.  Eli tells his son he is there to make something of himself, for his mother and he should ignore the other kids.  He should remember why he is there.

Al Capone is visiting his collector, Jake and he brings him food.  Van Alden walks in with the day old daisies from O’Banion.  Al Capone is not pleased, he is insulted.  Al questions Van Alden about O’Banion but Van Alden is not saying anything.

Van Alden is uncomfortable and wants to leave but Al Capone tells him to wait, he can leave O’Banion waiting..

Arnold is surprise that Nucky made the offer.  Nucky tells him they have to move forward, the previous year was difficult for both of them.

Arnold leaves and Eli asks Nucky if he can trust him.

Eddie Kessler meets one of the Capones at the train station to give him money.  Capone asks Eddie to take him to eat and some convincing Eddie decides to take him to a resturant.

Eli Thompson’s son Willie is down to his last six bottles of booze for their school party.

The Capones and Van Alden show up to do Jake’s collection at Jerry’s apartment.  Guess it did not go well because Jerry ends up thrown out the window.

Chalky comes up stairs and tells Nucky Arnold is playing poker and has requested his company.

Eddie is having dinner with the Capone brother, Bottles he met at the train station.  He tells Eddie he should come to Chicago.  He questions Eddie about many things.  Bottles and Eddie get on swell.

Back at school Jake and his friend are watching all the kids at the party getting drunk.  Willie and his friend have made a special concoction that they intend to put in the drink of a boy who is bullying them.

Nucky joins Arnold in the card game.  Nucky is being conservative and Arnold asks him why he is so careful.  Nucky tells him he does not play cards often and does not bet much.

Dr. Valentin Narcisse walks out of his office and Dunn is there he apologizes.  Dr. Narcisse accepts his apology, he tells Dunn that Chalky’s time has passed.  Dunn is pleased and think he will be the right man to run the operation.

Dr, Valentin Narcisse comes to where he had to go in and he tells Dunn some propaganda about how they have to promote the uplift of the race.  There is a homeless man on the steps and Dunn walks up and beats the crap out of him.  Dr. Valentin watches pleased.

The Capones and Van Alden are walking and they come on a bread truck. Al Capone is sure it is full of booze and is going to take it.  They tell Van Alden to get in, he needs to start living a bit they tell him.

Meanwhile, Arnold and Nucky are still playing cards and Arnold is out of money and he asks for a marker for $200,000.  Nucky agrees, they bring Arnold the money.

Nucky calls in the game they are playing.  Arnold loses the game to Nucky and does not look pleased.

Willie and his friend locked the bathroom door so when his school pal starts to react from all the laxatives they put in his alcohol starts to react.  The poor kids runs to the bathroom and the door is locked.  He loses control of his bowels and Willie comments something about how most kids are out of diapers.

Al Capone and Van Alden are driving in the stolen truck.  Al asks Van Alden what he thinks of  O’Banion.  Van Alden tells Capone O’Banion pays him well but does not treat him with respect.  Al Capone offers him a job.

They hear knocking from the back of the truck.  They stop, open the back of the truck and a man comes out.  He promises he will tell no one what he heard.   Capone tells him he has till he counts to 10 to get away.  He gives Van Alden the gun to shoot the man because Capone does not care if he tells O’Banion but Van Alden will.  Van Alden shoots the man but the gun jams.  Capone takes his Tommy Gun and shoots the man.

Back at school Willie and his friends go into the bathroom and find the boy that they drugged his drink he is on the floor covered with blood and dead.

Meanwhile back with Arnold he is still playing cards and Meyer whispers to him and suggests they leave.

Meyer comes to see Nucky and asks him not to extend Arnold’s credit anymore.  Meyer explains that Arnold is a great man but he cannot stand to lose.  Nucky tells Meyer that he is taking the offer off the table for Tampa.  Nucky cannot trust a man that is so obsessed.

Al Capone takes Van Alden home and tells him to stick with them.  Van Alden’s wife comes out to see him.

Meyer is waiting for the man who was playing cards with Arnold and beats the crap out of him.

Nucky is home and calls for Eddie but there is no Eddie.  He takes a drink and sits down.

Eddie and Bottles Capone show up at the train station still singing, seems they had a great time.  Eddie is pleased with himself.  Agent Knox and other agents walks up to Eddie and tells them they are with the Bureau of Investigation.  Eddie tells them he did nothing.  They tell him to put one foot in front of the other and not make a scene.