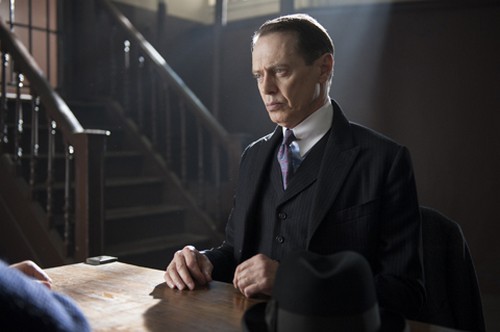 Tonight’s episode of BOARDWALK EMPIRE definitely knocked our socks off, and we couldn’t be more pleased with season 4, so far. If you are curious about next week’s episode, well, look no further. We have managed to get our hands on a sneak peek video and a few spoilers to whet your appetite as you wait  next week’s episode 3 “Acres of Diamonds.”

Tonight’s episode now working as a “delivery man” for Dean O’Banion, Van Alden was ordered to keep tabs on Al Capone, joining the ascendant mobster to help keep Cicero voters “informed” at a political rally. Dr. Valentin Narcisse arrived in Atlantic City, clashing with Chalky and Nucky over the loss of an employee. In Washington, Agent Knox aligned himself with J. Edgar Hoover, acting director of the Bureau of Investigation. Harrow failed to finish a job in Milwaukee, while Eddie demanded a promotion after 11 years of service. With a business opportunity on the horizon, Nucky departed for Florida.  So much more happened! If you missed the episode, head over to read our full and detailed recap here.

Spoiler alert: If you’re one of those people who doesn’t like spoilers, stop reading now! We have some juicy spoilers for you about the season 4 episode 3 of HBO’s “Boardwalk Empire”

Nucky has reservations about investing in a Tampa land deal engineered by transplanted bootlegger Bill McCoy. While there, he meets speakeasy owner Sally Wheet and questions her about Bill. Valentin Narcisse books a sexy jazz singer, Daughter Maitland, to perform at the Onyx, and gauges Dunn Purnsley’s allegiance to Chalky. Willie, Eli’s son, turns to Mickey Doyle and his bootleg warehouse to elevate his social standing at college. Gillian agrees to pose as Roy Phillips’ wife to impress a possible partner. Harrow tries to bury his past, though not before taking care of some unfinished business with Emma.”