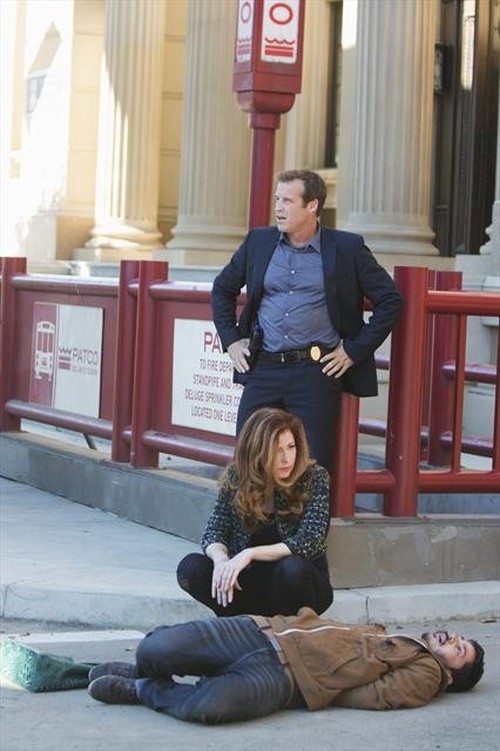 Tonight on ABC Body of Proof returns with a whole new episode called, “Eye for an Eye.” On tonight’s show Megan is reminded of her father’s suicide and sees a grief counselor she meets on a case.

On last night’s show when the son of a New York mob boss was found shot to death in an alley, Tommy, Adam and Megan investigate, only to be shot at themselves. Back in the morgue, the mobster threatened that he will make sure whoever killed his son won’t live to see another sunrise. When an early suspect was gunned down, Megan and her team realized they have to solve the case before more bodies pile up.

On tonight’s show Megan and Tommy must solve two murders that appear to be the work of vigilante killer. After Megan questions Trent Marsh (Henry Ian Cusick, “Scandal”), the grief counselor for one of the victim’s parents, she decides to take him up on his offer of counseling her on her own issues about her father’s suicide. But Megan is shocked by what she finds in his waiting room.

Tonight’s episode begins with Freddie Delgado being shot in the head in a parking garage. He responsible for killing a little girl named Emily  and a bunch of flyers with her name on it are in his car.  Hunt and Sullivan bring the little girls’ father in for questioning. He advocates vigilante justice but says he’s innocent.  Megan and Tommy pay his wife a visit and she says that killing that kid tore him up and made him crazy.

Megan is also dealing with her mother getting ready to sell the house. She and her daughter go to visit her mom and start looking through old things. The pictures and mementos bring back major memories. Her mom wants her to not touch anything of her father’s. It’s like she’s afraid of Megan feeling any of the pain that came with his death.

While she’s there Tommy calls her to another crimes scene. A halfway house girl has been found dead in the street.  It looks like Lori is another revenge killing. Years ago she threw acid in a mans face and killed him. They go to talk to the mans former wife to see if there could be a reason for revenge. Lori was killed with acid just like she did to someone else.

Megan talks to Trent Marsh who is a grief counselor. Instead of helping her figure out this case he pushes Megan’s buttons big time, triggering memories of her fathers suicide.  She talks to her mother again, who tells her that she has learned to move on from Megan’s fathers death because he simply didn’t want to stick around. Why lose precious time dwelling on what you can’t change.

Megan goes to lunch with her daughter who suggests she a counselor.  Lacey also saw a counselor after  being kidnapped and thinks the process will help her mother. Megan pays a visit to Trent’s office and realizes that Emily’s father and the former wife are both patients.  They realize that Trent could be the killer.  He might be looking to avenge people who have hurt his patients.

Tommy corners Marsh and Marsh almost taunts him, saying that even if he is a killer they’ll never figure it out. Marh’s wife was killed and the killer went free, Tommy believes that’s his motive. Unfortunately, they can’t prove it and he goes free. Tune in next week for a new Body of Proof!