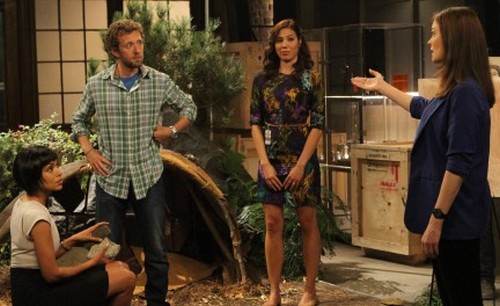 Tonight on FOX BONES returns with its winter premiere.  Bones is a darkly amusing procedural entering its eighth season and is inspired by real-life forensic anthropologist and novelist Kathy Reichs.  Dr. Temperance Brennan (Emily Deschanel) is a highly skilled forensic anthropologist who works at the Jeffersonian Institute in Washington, D.C., and writes novels on the side. When the standard methods of identifying a body are useless, law enforcement calls on Brennan for her uncanny ability to read clues left behind in the victim’s bones.

On last week’s show Angela and Avalon helped a high school girl find closure after the death of her friend.  When the Jeffersonian team investigated the death of a young boy whose soul apparently has not yet left his body, psychic Avalon Harmonia (guest star Cyndi Lauper) attempted to help the victim’s spirit cross over.

On tonight’s show the Jeffersonian team investigates the death of a professional ballroom dancer who was murdered three days before her audition on a popular dancing competition show. In order to solve the case, Brennan (Emily Deschanel) and Booth (David Boreanaz) go undercover as dance competitors to see if they can find potential suspects.

Tonight’s Bones episode 10 is going to be exciting, and you won’t want to miss. So be sure to tune in for our live coverage of Bones — tonight at 9PM EST! While you wait for our recap, hit the comments and let us know how you are enjoying Season 8 of Bones? Check out a Sneak peek video of tonight’s episode below!

Sweets is watching Paranormal Abnormalities – a supernatural reality show like Ghost Hunters. The host (Palmer) spies a raccoon while waiting on the “apparition.” He sees a glowing skeleton and Sweets freaks out watching it. It looks like a skeleton with gems attached.

Bones and Angela are at the diner talking shop. Angela isn’t happy because she feels like she’s not an artist anymore. Bones says she can’t imagine not doing what she loves. Bones gets a call to come to the lab. Angela stays behind to finish her breakfast – a little depressed.

The glowing gem skeleton is in the lab! Booth said Palmer made delivering the skeleton to the Jeffersonian part of the show. There are crystals affixed to the body that came from the nearby quarry. Hodgins said they all could have formed within a few days.

They tell Booth they can’t determine cause of death until they remove all the gems. They find some odd bones in the feet that might help identify. Booth is bored and leaves. Wendell goes to work prying crystals off of the bones and they tell him it’s all up to him. He inadvertently snaps the hand loose from the body and earns a glare from Brennan. Cam and Hodgins look on in shock.

Angela and Bones are looking at photos of malformed feet trying to see what was wrong with the victim’s feet. Repetitive, slow, up and down movements destroyed certain bones and caused remodeling. Certain athletes – specifically dancers – often have injuries of this type. They decide to look for missing dancers and find one Katarina.

She was reported missing a week ago by her dance partner Kendrick. He comes into the FBI to chat. He reveals that the only thing that would keep her from rehearsal was death. He says women kill to dance with him – Katarina came all the way from Germany to dance with him. He’s found a replacement – partner Blossom – because show auditions for Dance to the Top.

Booth asks if Kendrick and Katarina were sleeping together. Sweets says it’s a possibility – Kendrick isn’t gay. Booth reveals that he taught dance classes to pay his way through college. Sweets wants to know if he was a stripper. Booth insists he was teaching real dance – his mom taught him to dance. Sweets tells him he was a dancing gigolo and Booth is annoyed.

In the lab, Wendell finds Hodgins experimenting with maggots. He says the victim may not have been sexually assaulted – maggots may have moved her shorts down – rather than her being left with her pants down!

Sweets thinks Booth should go undercover on Dance to the Top. Bones says she watches it on TV and can teach Booth. Sweets laugh and tells her about Booth’s background. She doesn’t believe it. She says she learned to play tennis watching Wimbledon on TV.

Sweets thinks Kendrick’s new partner could be in danger. He says Kendrick is either a target for foul play or perhaps a suspect. Bones begs Booth to let them go undercover on the dance show and even offers him money. Booth finally relents.

At the Dance to the Top auditions, Booth and Bones sign up. Back at the lab, Wendell is still having problems prying off the gems. Hodgins said the problem is that the crystals are tightly adhered to the bones. Wendell tries to instigate Hodgins to help by challenging his king of the lab status.

Booth is trying to show Bones how to dance. She’s terribly awkward. An angry stage mom is yelling at the smoothie delivery man. They watch the couple with her dance and they’re great. Bones says that with Katarina gone, they have a good chance to win.

Angela is staring at x-rays of the bejeweled skeleton. She tells Cam she’s upset about having to translate something that beautiful into cause of death. She’s having a life crisis. Cam offers her time off. Ang says she hasn’t found anything on the x-rays that indicate cause of death.

Booth talks to Blossom, Kendrick’s partner and asks about his dead partner. She says she’s not talking. He asks if she’s worried the same thing could happen to Kendrick and she accuses him of making threats and storms away.

At the lab, Wendell and Hodgins are testing (with a fake corpse) vibrating a liquid solution around the skeleton. The tube overflows and the skeleton is left in pieces. Epic fail!

Back at the dance rehearsals, Bones approaches the girl with the angry mom. She starts telling her weird stuff about how certain tribes have mothers that force them to live up to their mother’s expectations. Her mom tries to chase off Bones and Layla tries to calm her down. She tells Bones if she doesn’t watch it, she’ll end up like Katarina. Layla and Katarina were friends.

Bones wants to practice, but she is truly awful.

At the lab, they’ve got the skeleton back in a fluid tube and are again trying to knock the gems loose. It works! Hodgins’ method got everything off the bones. Bones comes back to the lab and Wendell shows her a photo of the victim’s teeth. There’s some problem with the enamel on one side. They decide bulimia could explain it.

Wendell shows her injuries to her neck that explains cause of death. Her neck was broken! Cam comes in to comment on Bones dress and she insists that she and Booth are going to win the dance competition.

Booth and Kendrick are chatting and he tells Booth he needs to get a new partner. He advises him to just tell her she can’t dance. He asks him if he got his new partner by knocking off his old one. Kendrick is offended.

Angela is leaving and Cam panics, thinking she’s leaving for good. She’s not. She’s taking her son to the art museum to stare at beautiful art – Sargent in particular. She likes the way his subjects hold their arms.

Wendell tells Cam that Katarina was poisoned – it was lead. And it’s in amounts that clearly show it wasn’t accidental.

Hodgins tells Cam that Katarina was being poisoned over an extended period of time, but didn’t die of poison. Wendell asks if she wouldn’t taste the lead. Cam says lead acetate is used in hair dye and clothing dye. Wendell says all the contestants wear costumes, so that doesn’t help.

Bones and Booth are on with Sweets and he says they’re running all the dancers through the FBI database. Booth says the poisoning took place over a long period – that means they had ongoing access. But the fact that the poison didn’t kill her shows they were either incompetent or not trying to kill her. They go with incompetent based on the subsequent neck injury.

Ang and her son are back in the lab. Cam is rocking the boy. Ang said Katarina made a doctor’s appointment with a neurologist – perhaps the lead poisoning was impacting her dancing. But they also found out that Katarina always wins.

Booth and Bones stare at the stage mom and wonder if she’s using lead based dye on Layla’s costumes.

Angela and Hodgins are talking while their son naps about her dissatisfaction. He wants to know what she wants. She says she wants times to stare at Sargent’s work and wants to learn to paint arms like he does. And she wants to do it full time.

Hodgins chases Cam down for a private chat.

Booth and Bones are looking at Layla’s costumes for traces of the lead poison. Bones is testing the fabric and finds that the cloth has the poison in it. They discuss that because Katarina and Layla were friends, Layla’s mom would have access to poison her.

At the auditions, Booth is criticizing the dancing couple, but Bones think they’re great. The judges give praise and Layla hugs Bones when she comes off stage. Booth pulls them aside and Layla confesses to poisoning her. The mom tells her not to talk. Layla says she just wanted to make her a little sick so that she wouldn’t win.

Booth says they need to find Layla’s boyfriend who would have been strong enough to help her break Katarina’s neck. They find Tommy – Layla’s guy – watching auditions. Booth flashes his badge and he runs. The end up tangling backstage and getting twisted in the curtains. He runs into Booth who tries to kick him and he runs backward – Booth punches him in the face and he’s knocked out. The judges think Booth and Boones antics were part of the dance number and they earn a standing ovation.

Tommy is hauled off in handcuffs. Bones really wants to audition and Booth doesn’t. She insists that she already texted everyone. At the lab, the squints are rushing out to get there on time. Cam comes in to talk to Ang. Cam says she has to cut her hours because of funding cuts. Angela knows it was Hodgins that put her up to it.

Cam asks her to agree to it. She sees it as a win win and says she’d rather have just a little of Angela than a lot of someone else.

At the auditions, Bones and Booth are onstage. She’s ready to Rumba but he says they’re going to waltz. He tells her to be quiet and let him lead. She won’t let him lead and it gets worse and worse. Angela likes the way Bones is moving her arms – she says she looks beautiful and happy. Finally, Bones relaxes and lets Booth move her around the stage. She’s got her eyes closed envisioning their beautiful dance.

BTWs – loud mouth judge Mary Murphy from So You Think You Can Dance was one of the judges on the mock reality show.