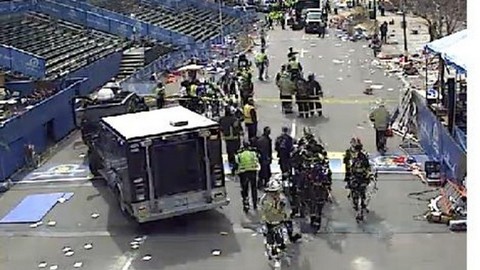 The Boston Marathon is something of an institution if you live in the U.S. and you don’t need to be a runner to appreciate that. Thousands run each year an even more cram into an area near to the finish line to watch their loved ones complete the grueling 26.2 mile trek. This years race is clearly going to go down in history due to the two expositions that erupted about a mile from the finish line, nearly an hour ago.

Obviously, information is still unfolding but what we do know, at least from the earliest of reports is that two explosions occurred seconds apart, on opposite sides of the street. The first appeared to come from the sidewalk and caused a huge plume of white smoke and did smash second and third story windows in the buildings nearby. As people stared in the direction of the first explosion and tried to process what was happening, a smaller explosion rocked the opposite side of the street. That seemed to be smaller than the first but still it just added to the absolute chaos and terror on site.

As of now at least 6 people have been taken to Massachusetts General Hospital and much of downtown Boston is on lockdown. There is a report of a suspicious device at the Mandarin Hotel that is being investigated right now. It could all be a weird coincidence, but I’m going to put my bet on homegrown terror. Some goofball that wanted to cause fear and drama. Guess what, at least as of now they’ve succeeded.

Update – 19 injured and VP Biden called the explosions ‘a bombing.’