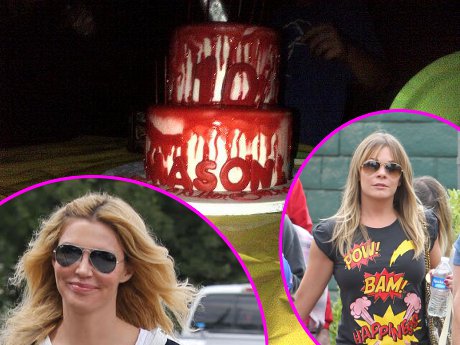 I wonder if it’s possible to imagine a world in which Brandi Glanville and LeAnn Rimes go a full day without fighting, bickering, or subtly (erm, not so subtly) trying to one up each other? Eddie Cibrian‘s son, Mason Cibrian, just turned ten years old and, naturally, both Brandi and LeAnn each had to throw him the best-est, most awesome-est, most fantastic-est party he could fathom.

The two crazy, dramatic ladies didn’t participate in a direct dialogue, but the tweets that flew around the internet last night were definitely laced with some form of mild, I’m-def-better-than-you venom.

Brandi, the Real Housewives of Beverly Hills star, started the night off right by tweeting about Mason’s first birthday party (but, let’s face it, these birthday parties were meant for Brandi and LeAnn). “Mason said this was the BEST cake ever!” she tweeted, alongside a picture of a cake that appears to be dripping blood. Yikes. A good cake for a ten year old?

Radar Online reports: The party seems to have included a show and tell with some wildlife, because Brandi also posted a photo showing her hugging her younger boy, Jake, who was crying while she had a small snake wrapped around her neck and several other boys looked on. “Jake and mommy were brave also,” she commented.

Next, Mason was off to stepmom and LeAnn’s, where it was her turn to throw all the awesomesauce on the table. “Just had a great time at Mason’s 10th birthday party. Such cute kids,” she tweeted. Soon after, she released another tweet: “Night!  Trying to get several little boys to go to bed after a big party.  LOTS of pizza and sugar!!”

At which party do you think Mason had the most fun? Do you think Brandi and LeAnn were throwing these birthday parties with a hidden agenda? Or do you think we should just mind our own business and let them party on like the rockstars they are? As usual, Eddie Cibrian assumed his ghost-like role . . . .