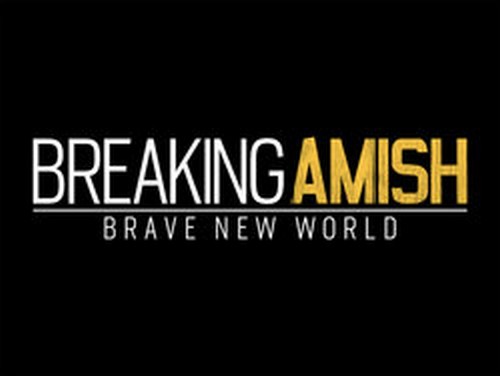 BREAKING AMISH: BRAVE NEW WORLD continues on TLC tonight with a new episode called, “Forbidden Fruit.”  If you have never watched the show before it is a spin-off of TLC’s Breaking Amish.  The show encompasses the original cast from season one as they take on life in Pinecraft – a small neighborhood located within Sarasota, Florida where there is a community of ex-Amish and Amish.

It chronicles the lives of the cast as they endure the realities of living in new surroundings and face new situations involving work, friendship, romance, and lifestyle. It also includes the drama that develops between cast members as they undergo various experiences.

On tonight’s show a surprise modeling gig in Miami offers Kate an escape from the others, or so she thinks. Katie Ann has a surprise of her own in store for Mary and a big decision about her future. Jeremiah discovers footage of Kate that leaves everyone in shock.

Abe, Rebecca, Kate, and Jeremiah are out to lunch when they’re confronted by an unknown woman who felt that the group has unfairly bashed the Amish community. The guys and Rebecca defend themselves when they state that they only told the truth and their experiences. Kate, the lone man out, agrees with the woman and gets a thank you before the stranger leaves. Rebecca sees this as a betrayal and everyone decide not eat at the restaurant anymore.

Kate leaves the house to go to Miami. She leaves a note with her phone number and address so that they know how to contact her. Sabrina tells the rest of the group about Kate’s trip and somehow or another the other guys all agree to go to Miami and party it up with Kate.

Kate is shocked as hell when the group shows up at her door. They believe they’re going to stay with her but she came to Miami for work. The guys don’t care about her working, they just want to have fun as well as show Kate she isn’t better than them. Kate tells them they can’t stay with her and kick them out.

Kate’s friend Selena comes down to Miami. Kate is glad her friend is here and the two sneak off to see Miami.

The next day. Sabrina and Jeremiah join Kate and her model friends at the pool unfortunately carrying glass bear bottles. It’s a rule that the bottles aren’t allowed but when Kate tries to tell this they ignore her. Jeremiah and Abe then believe its good idea to cannon ball into the pool. The models, after getting wet, quickly leave.

Kate and her friend attempt to talk to Sabrina and Jeremiah about why it wasn’t cool for them to follow her. It turns into a fight after what happened in New York get brought up until Kate just walks off.

On the shoot, Kate is working when the gang sees her on the beach and decides to joke around. Jeremiah thinks Sabrina and Rebecca are jealous of Kate being a model. Kate happens to thinks that Rebecca may be reminded of being rejected by modeling every time Kate goes to work. After the shoot everyone go out to party in Miami with earlier arguments swept under the rug… for now.

Everyone was drinking and having fun when Jeremiah gets kicked out. It would have been fine if the bouncer didn’t then make fun of Jeremiah. Jeremiah wants to fight the guy and his friends stop him. They get back to the hotel and its there that Jeremiah breaks down into tears. Everyone rallies round him even Kate.
In Sarasota, Mary and Katie-Ann finally make it to the beach. They have fun and Mary is glad that her daughter got to enjoy this day. Now it’s time for decisions. Katie-Ann decides to be English before she can commit herself to the church. Her mom let’s her go gladly knowing that unlike her own experience, Katie-Ann will have support.

Surprisingly Mary later goes out to a bar and enjoys her drinks. She doesn’t like the idea of her daughter being around Rebecca but what can you do. Mary knows she’s going to get some hassle about Katie-Ann’s decision when she returns to her church but she isn’t going to trouble herself over it.

Sabrina gets the call from the private investigator about cousins who want to meet her. Sabrina is excited to go to Puerto Rico because she’s looking for a place she belongs. Jeremiah offers to go with her for support.

On the second night out on the town, two Puerto Rican guys come over to chat with Sabrina. Their conversation makes her think about her upcoming trip to Puerto Rico. Instead of easing her, all of the talking makes her nervous about her trip.

Some poor guy attempts to flirt with Mary. She politely makes it known that she’s not interested.

A model that partied with Kate had taken a video and shown the footage to Jeremiah. He calls over his friends and everyone is shocked by what they see.