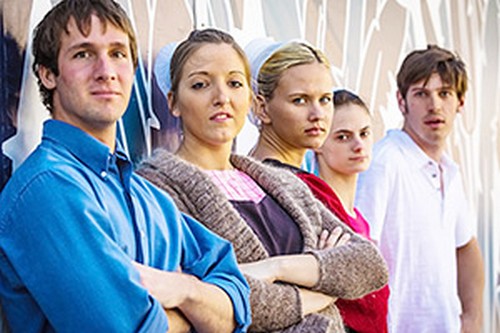 Tonight on TLC BREAKING AMISH returns with the second season premiere.  This season they have changed the name of Breaking Amish: Los Angeles, since the cast has relocated to LA.  This season will find them leaving their communities for the sunny skies and gritty streets of Los Angeles.

Armed with the passion to pursue their aspirations, each must find the courage to leave their sheltered lives and head west for adventure and a world of first experiences.

On tonight’s show a new group of young Amish and Mennonite adults, Iva, Matt, Lizzie, Betsy and Devon are trading in their old world traditions for a new life. Iva, Matt, Lizzie, Betsy and Devon risk losing everything and everyone they know in pursuit of their dreams when they venture outside of their Amish and Mennonite lifestyles.

It’s a whole new set of Amish men and women ready to experience the English way of life. The difference between Mennonites and the Amish is that the Mennonites can use electricity. Matthew, 24, is a Mennonite that has some skeletons in his closet. He won’t reveal what they are exactly only that they took him to a dark place. He wants to pursue his dreams and loves to sew. He left his parent’s house because they wanted to send him to correction facility named Shepherd’s hold that is supposed to fix several problem men in the community.

Amish men aren’t allowed to wear red. Hey believe it’s too showy. Samuel, 26, likes wearing red pajamas. He lives with his parents and shares a room with his brother. He has six sisters and two brothers and the family is very close. His sister Lizzie, 21, is especially close to her brother. She’s never felt like she fit in with the Amish. She’s hiding a secret from her family. She’s pregnant. She has had a secret relationship that no one knew about so she wants to leave the community before she has the baby.

Iva is Amish and 19 years old. She wants to leave and isn’t afraid about the gossip that will follow her. She likes baking and hopes to become a famous baker. Iva was disappointed she couldn’t go to school for cooking. She wouldn’t be the first person in her family to leave. Her dad left the community to live with another woman. Iva has tried to leave before. She got her GED and was accepted into college but she couldn’t keep up with her education. She was only allowed to go up to 8th grade. She’s hoping the next time will be different.

Devon, 21, is Amish. He’s dated some Amish girls and he wants to really live crazily when he enters the Amish world. Yet he knows he can’t come back. They would completely shun him on his return.

Betsy, 21, wants to be a photographer. She was born English and adopted into an Amish family. She’s married and a little bit worried her husband will try to stop from leaving.

Lizzie chooses to tell her brother Samuel about wanting to leave. He gets upset. She told him the camera were just a documentary but now knows it’s to document her leaving to go to California. He still doesn’t know about the baby. She’s been hiding her stomach and claiming stress has been making her eat.

Betsy tells her family about her leaving. Her relatives are concerned and scared for her. They’re crying and she hasn’t even left yet. Betsy is worried how her leaving will affect her husband’s standing in the community but she’s still going.
Matthew tells his family he’s leaving. He tells them he got an apprenticeship with upholster and they fell like he’s lying to them. Nothing he says can convince them otherwise.

Iva has a boyfriend named Sam. He’s a Mennonite. He’s the best relationship she’s been in. She previously dated Jeremiah but she hasn’t told Sam about her trip yet. But one thing Iva has been very clear about standing on her own two feet without a man’s help like her mom.

Everyone is packing up to leave. They’re ready to start their new life but will it be worth it? They’ll be shunned. Some more severely than others. Will their dreams be worth it?