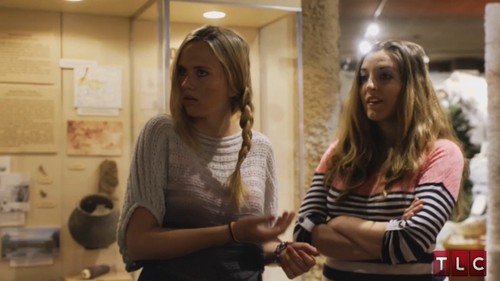 BREAKING AMISH: LA continues on TLC with a new episode called, “Sin City.” On tonight’s show the group takes a spontaneous trip to Las Vegas. Did you watch last week’s crazy episode? If you want to get caught up we have a full and detailed recap here for you.

On last week’s show Betsy was confronted as more was revealed about what took place at the house one night behind closed doors. Iva called on her boyfriend Sam to help her in a time of need, but got a surprise of her own. And the group took a spontaneous trip to Las Vegas.

On tonight’s show the group takes Las Vegas by storm, but it’s not all fun and games when Matt is wary of temptation. Betsy’s on a mission to expose the truth and has evidence that will change everything.

The boys have decided on a night out on the town. Even Matt is excited. He got dress up in the skinniest jeans seen on a man (the other commentated on whether his privates could breathe) and he’s feeling good.

The feeling doesn’t last at the club though. They ended up going to what looks like a sex dungeon. There’s a burlesque show and onstage whipping. This isn’t Matt’s scene even though it‘s perfect for the other guys. Devon meets a special lady and so does Sam. They were several hook-ups and none involved Matt who again mentioned how his parents tried to send him away to special facility. Coincidence?

Late Matt wants to do something he’d find fun by taking the gang out to a museum. Once there everybody starts whining and complaining about visiting a boring museum. Matt finally has enough and tells them they’re being childish. At that point he’s had enough and told them they could leave if they want. The only person still there after that proclamation was Matt. So he follows the guys.

Where do the guys go? They go to casino. It isn’t too long before Andrew starts losing at the tables so in the only way to get him outside Samuel suggests a magic show. Matt is nervous about magic. He’s still iffy on the witchcraft business. Especially with Betsy not too far in his memory. Nevertheless he agrees to the magic show when he got a text from Betsy.

Betsy is actually in Las Vegas. She wants to defend herself against Iva’s charges so she took the bus in. That’s one of the first things she complains about. Taking the bus here. Then she does what she needs to do. She apologizes for wrecking his stuff before asking for help to get Iva to drop the charges. Matt tells her what hotel they’re staying at.

Lizzie and Matt ask for the truth. Because Iva’ story kept changing. That’s when the truth comes out. Iva and Matt had secret text meeting in which they agreed to pin everything on Betsy and that he was never in the room. It was Iva’s plan and Devon merely followed along. They thought Betsy at most would get probation.

Everyone is disgusted with these two. Sam has to leave the room in order for no one to see him cry. It’s just what now?

Betsy is willing to forgive Iva. Forgetting is a whole other story. Devon’s apology via text doesn’t sit well with Betsy. She gets him to read aloud his apology. She tries to explain how he hurt her yet he’s sitting in front of her with a lost stare. Betsy knows he doesn’t care.

Everyone is returning to LA when they unanimously voted that Devon should be the one to take the bus back. Sam is angrier at Devon than he is at Iva. Iva was drunk and Betsy was literally falling down. They feel Devon shouldn’t have touched drunken girls. So he woke up in the hotel room by himself.