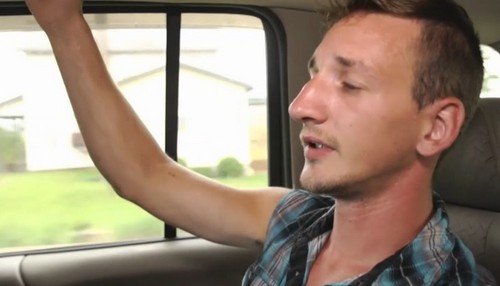 BREAKING AMISH: LA continues on TLC with a new episode called, “Cast Off.” On tonight’s show Matt reveals big news to the group.  Did you watch last week’s crazy episode? If you want to get caught up we have a full and detailed recap here for you.

On last week’s show the group traveled home from LA with no telling what their fates would be. Matt’s reception from his parents was far more dramatic than he ever anticipated. Andrew went home to mother Mary and when Lizzie went into labor the father of her baby was revealed.

On tonight’s show Sam does not approve of his sister’s choices and confronts the father of her new born baby. Lizzie has a big decision to make. Andrew’s past comes back to haunt him with his probation officer hot on his trail. Matt reveals big news to the group.

Lizzie is still keeping secrets. She had her boyfriend, Hoj, in the delivery room with her. Her family doesn’t know he’s black yet however once they see the baby they’ll know. Samuel was out in the waiting area. He thought Lizzie didn’t want him in the delivery room because she was raised to be modest.

Lizzie and Hoj had met when she was at the Amish market selling produce. They met and began to secretly date soon after. Hoj is in love her and that’s why he was willing to be a secret from her family. But he won’t be a secret much longer. He wasn’t in the room when Samuel saw the baby. If he was he would have gotten into a fight. Samuel is shocked the baby isn’t all white. He loves his nephew, that’s not in question, he’s just shocked that not only the baby’s father isn’t Amish but that Lizzie didn’t say her boyfriend was black.

Samuel left the hospital in shock and then continue asking every man of color if he’s the father of his sister’s baby.

Betsy returned home finally. She had detoured last week to say goodbye to her birth mother. Nevertheless she has to deal with her husband. She’s not going to tell him everything that happened in LA. She feels he doesn’t really care about her and that he’s too cold. She wants to stay in the community and if that means staying with her husband; she’s prepared to do that.

Samuel found the right black guy eventually. He tells Hoj how he ruined his family. There has never been a black Amish. Basically he’s ranting at him and was close to walking away when a nurse informs the both of them that something is wrong with Lizzie. Samuel was prepared to hate Hoj but he does admire how quick the guy ran to get to Lizzie.

Lizzie had fainted. It wasn’t anything serious; she just hadn’t eaten in a while. Samuel has more respect with the way Hoj handled the situation. He even has Samuel questioning some of the Amish teachings. Lizzie on the other hand is returning to her family. She wants to make peace with her family. She doesn’t tell Hoj this until they pull up to the Amish community.

Once she gets there though, Lizzie tells Hoj she’s staying with her family and then tells him that their relationship isn’t going to work. She didn’t like the English world. All Hoj hears is that she’s leaving him and he begins stuttering with his questions. Like is she ashamed of him?

She says no and that he doesn’t understand their lifestyle. Her family shunned because they do love her and she needs them in her life. Hoj finally has enough and tells her to get out. After she goes he takes out his anger on the cameraman and makes the guy leaves his car as well.

Lizzie was even sure her family would accept her child but the baby turns out to be the ice breaker with her family. Her family lets her move back in and they’re willing to forgive. She has to make thing right with the bishop but otherwise she and her baby will fit right back into the family. Hoj is the one in breaking down. He did love Lizzie and he feels now that she never loved him enough.

Lizzie has another person to put up with. Iva has been contacting Samuel to try and get Lizzie to speak to her. Lizzie unlike the guys back in LA knows it was Iva’s fault. Even though she’s an outcast right now that doesn’t mean she should forgive Iva. She knows that girl is poison. Growing up she had defended Iva from people said about her but she now understand that they were all right about her. She makes everything about herself.

Meanwhile Iva just told her fiancée Same about both Devon’s visit and his letter. Sam is angry at Devon’s audacity and Iva cheers up by saying she sent Devon immediately packing. They never want to see Devon again.

Devon is going back to the Amish lifestyle. He feels the English way of life led him down the wrong path. He isn’t confused over what he wants to do anymore.

Andrew got called into seeing his probation officer. Someone had reported him. Over his trip to California or what no one knows. What does matter is that at the office he fails the drug test. They’re taking him back to Jail.

Samuel tells Lizzie he lost his virginity to Betsy. Lizzie is so angry. Samuel had judged her so harshly and he did the same to Devon. Now to find out he went and did the same thing. She can barely look at him. Lizzie tells him he has to tell their family and the church but he doesn’t want to. He was willing to say it to her but he doesn’t want to admit premarital sex to anyone else.

Matt has decided to leave their rural area. He’s going back to LA to make a go of his fashion career. Where he’s at now is too dead. Although before he leaves he wants to host an impromptu reunion. The going away party comes as a complete shock to his girlfriend. She’s helping him decorate when she finds out. She feels they can work it out long distance.

The guests start arriving. Lizzie is surprised to meet Matt’s girlfriend. However that appeared to be the only interesting thing for a while. The party is boring. Then they get to talking. Everyone is sad that Andrew is back in jail. Matt hadn’t want any drama but when Iva tries to talk to Lizzie then all gloves come off. Iva doesn’t understand why Lizzie can’t forgive her yet. She goes as far to accuse Lizzie of being jealous.