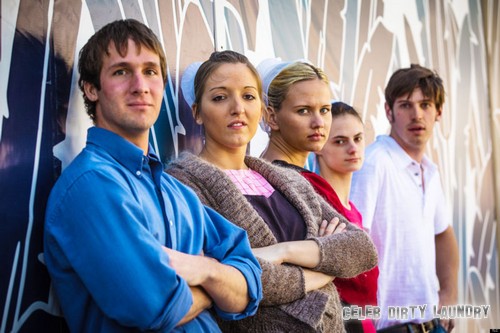 BREAKING AMISH: LA continues on TLC with its season 2 reunion show called, “The Shunning Truth.” On tonight’s show Sam, Lizzie, Matt, Devon, Betsy, and Iva set the record straight once and for all.  Did you watch tonight’s finale?

On tonight’s finale Sam confessed about what happened with Betsy in LA and had to face the music. Matt’s problems with the law continued and he found out there was a warrant for his arrest. The groups gathered to meet Lizzie’s baby and were in for a few surprises.

On tonight’s show the group of Breaking Amish LA are together again as NBC’s Michelle Beadle digs deeper into their rocky relationships and stunning betrayals. Nothing is off limits as Sam, Lizzie, Matt, Devon, Betsy, and Iva set the record straight once and for all. We will find out if the cast decided to stay English or go back to the Amish lifestyle.

We will be covering Breaking Amish: Los Angeles tonight at 10PM EST so don’t forget to come back to this site for our full and detailed recap.  Make sure to refresh often to get the most recent details.  While you wait for the recap let us know if you enjoyed this season of Breaking Amish LA.

It’s time for the reunion and everyone is there minus Andrew. He is currently in jail but he did mail in a letter to be read later. Now is for the people on the couch to go over their entire LA experience.

Matt makes for interesting fodder with all of things he did in LA. Like when he and the guys went to a strip club. At the time Matt grew very uncomfortable and left to go outside and pray. Matt can laugh it off while he’s on the chair but Lizzie can’t help giving him some cross eye when he goes on to say that whole scene makes him uncomfortable. Everyone else gently rib him when he says he doesn’t want to see any of that until he gets married.

One of things Mat comes under fire for is when he created house rules. Many hated it at the time and continue to hate it. Matt is able to more explains himself. He says he didn’t want anyone to have regrets and he created the rules to protect them but he’s able to see now how much he upset them and he apologizes.

The next subject is Betsy’s witchcraft. The footage makes everyone laugh but later Lizzie says Betsy creeped her out. The whole Betsy hexed her baby still ticks her off. She can’t understand how Betsy laughs it off even now. Betsy understands but she won’t get all apologetic. She never set out to hurt anyone. That includes Iva. Betsy had taken her hair to make sure that Iva could do anything against her again. That’s it. The fact people feared her isn’t her problem.

What is her problem is the footage of her and Samuel going into the bathroom together. The two admit to have sex but they regret it. They had too much to drink and let things get carried away.

Michelle brings back the topic Matt. Felicia is on the couch with him and Michelle wants to know about Matt and fashion. He does have a love of sewing. Matt understands that a lot of people assume he’s gay and he feels it’s because of his sewing. The other girls deny that’s it. They say his demeanor is why they assumed he’s gay.

Prior to leaving home, Matt was punished for lust issues. His family would haves sent him away to a special facility. Matt says he understand and is even willing to do it in the future if or when it became necessary. Everyone doesn’t understand. To them lust is natural. That’s why when they hear Matt hasn’t even kiss Felicia they turn away.

Michelle doesn’t understand either. What kind of relationship stops and hand holding and hugs. That’s foreign to her. No wonder she changes the subject to Lizzie’s pregnancy. That she could get!