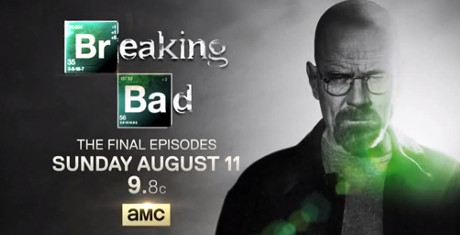 The final season of Breaking Bad will be coming at us faster than we know it and fans of this critically acclaimed show know that they’re in for some powerhouse conclusions. If you don’t like being spoiled (and with a show like this, I can understand why), then perhaps you should divert your attention now, because some major spoilage action follows this paragraph. Consider yourself warned, warned:  turn back now, non-spoil-lovers!

In spoilers and rumors commenting on the final eight episodes of BB, the fate of Walt has been put into question. Will he live? Or will he die? The debate continues and no one is 100% certain as to how his character will fare by the time the final credits roll, but don’t be surprised if he bites the dust.

At a recent New York Times press event, Bryan Cranston said, “I think there’s a good case for that [his death], that maybe that’s a fitful end. And yet what if the thing he wanted the most, which was the togetherness of his family – what if he lived and they didn’t? Wouldn’t that be a worse hell to be in? Or maybe he should die, I vacillate on this.”

On Leno, Cranston gave some more spoils: “For fans of the show, it’s always been kind of a serpentine struggle for Walter White trying to navigate his way through this. The last eight is like the downward slide of a roller coaster. Your arms are up. You’re screaming. It goes quickly.”

The season will return on August 11th to give longtime fans of this show some form of conclusion. What are you hoping for? What do you think will happen? Will this be the end of Walter White? Take our poll below. We’re curious to know what you think!