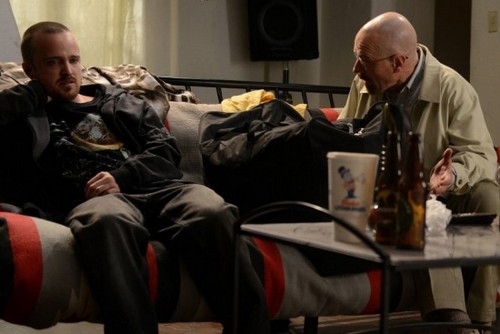 Tonight on AMC BREAKING BAD returns with it’s fifth and last season.  Tonight is the summer Premiere called, “Blood Money”  and on tonight’s show Walt and Jesse adjust to life out of the business and Hank grapples with a troubling lead.

When we left off the first part of season 5 things were coming together in Hank’s mind after finding Walt’s copy of “Leaves of Grass” in the bathroom.  Hank put together that Walt is the W.W. in Gale’s notebooks.  His brother-in-law is the drug lord he has been looking for.  Walt’s wife Skyler wants out, they have more money than they can ever spend and she is nervous about what Walt’s business could bring to them.  Jesse also wants out, he is done with the criminal life.  Walter killed Mike and told Skyler he is out, but with Walt you never know what he really means.  Walt likes power so it is hard to believe he will give it up.  Also Walt had another Cat Scan so perhaps his cancer is back.

On tonight’s show reviews are saying that this season’s episodes are going to be some of the most powerful scenes since the series debuted.  Since at the end of the first half of the season Jesse wanted out and Walt told Skyler he was done. Walt and Jesse will be adjusting to life finally out of the business.  Meanwhile Hank finally realized that Walt is the W.W. he has been looking for and he struggle with what to do.  He cannot act on his information immediately he is going to have to build a case against Walt.

The Daily News reports on the first episode, “If this first episode foreshadows the other seven, much of the drama will be psychological. While Bryan Cranston’s Walter White tries to ignore the toll of his chosen course on those around him, the wreckage has begun piling up.  Walter’s tortured and conflicted partner Jesse (Aaron Paul) can’t shake the murder of a 12-year-old on a dirt bike. Walter’s wife Skyler (Anna Gunn) is just trying to buy time.  Walter’s cop brother-in-law Hank (Dean Norris), the closest thing the show has to a good guy, remains a nagging loose end that Walter hasn’t fully tied up.”

Celeb Dirty Laundry will be covering all the drama of this final season and you don’t want to miss this highly acclaimed television show featuring these top-notch actors. Prepare for the final Breaking Bad sprint to the finish line and join us each week for our live recap of Breaking Bad at 8PM EST!

RECAP: We see some kids in a pool and they are skate boarding, it is Walt’s home and it is all abandoned and fenced in. Walt arrives, he has a crowbar and breaks through the fence. Once inside the house, Walt looks around and sees “Heisenberg” spray painted on one of the walls, he hears the kids skate boarding in the empty and abandoned pool. Walt continues to walk around the house, it is empty and run down, he looks ragged and tired. He walks of to an electrical socket, removes the cover and retrieves a small vial.

Walt is outside, he sees Carol and says hello, she drops her groceries and is completely stunned.

Now we rewind to the present day, Hank finally leaves the washroom with the book in his hands and a look of disbelief on his face. Walt looks outside in the backyard of Walt’s house and sees Walt and his family with his wife, Marie, he tells her that they need to shove off. Hank tries to rush to the driver’s seat of his vehicle and Walt comes over and asks him if he is ok to drive, Hank says yes. Walt says hi to Carol.

In the car, Hank is still in disbelief, his wife is speaking but he hears nothing because he is deep in his thoughts and shocked beyond belief. Hank is getting angry, Marie notices that something is wrong, he swerves the car and hits a fence. Hank scrambles out of the car, he has trouble breathing, Marie starts screaming for someone to call 911.

Hank is now home, he did go to the hospital but he is fine, he tells Marie not to tell Skyler about what happened. Hank is matching the hand writing from the notes to the one in the book to verify that Walt is their man.

Walt is at the car wash, he speaks to Skyler about reorganizing some of the inventory. Then he tells Skyler that the story comes first, they are car wash owners. Also, he thinks they should buy more, because that is what successful car wash owners do. Skyler agrees to think about it.

Lydia arrives at the car wash and tells Walt that the meth is 68% and falling, the drop in quality is not what she agreed to. She tells him to fix it and get the ship back on course. Walt tells her that none of this is his concern even though she tells him that he is putting her in a box.

Skyler walks over to Walt and asks who the woman was, he says a former business associate that wants him to go back and he won’t. Skyler goes over to Lydia and tells her to get out and to never come back.

Hank is outside and tells Marie that he will not be going into work today, she says it’s okay and that he should take his time resting. The door bell rings and Marie answers it; Hank ordered some stuff and asks them to bring it to the garage. They ask to help Hank sort through all the boxes and he just tells them to leave.Hank starts taking a look at all the files they have connected to the blue meth; trying to find a way Walter is connected to the whole case. Jessie is at has house hanging out with Badger and Skinny Pete.

They are talking about Star Trek and Jessie is just sitting there listening to them, they are talking about a pie eating contest between the crew mates and the two are getting really into it. Badger is just going on and on; Skinny Pete is loving it and can’t believe it. Jessie just leaves while they are in mid conversation and goes to see Saul.

Jessie is sitting in the waiting room and pulls out a joint and starts smoking. They then let Jessie in and he puts the bags of money on the table, Saul asks if he’s alone. Jessie says he hasn’t seen Walt, Jessie tells Saul to give away his money to a Mr. and Mrs. Sharp; he is also giving the other bag of money to Mike’s daughter.

Saul says he’s going to do it even though he thinks it’s a pretty dumb idea; Jessie just walks out and tells him to get it done. Saul pulls out a phone and calls Walter, he tells Saul to hold on to the money. He says he will handle the problem.

Jessie is back at his house just sitting there, he hears the door being knocked and does nothing for a bit; he get up and goes to see Walt is over bringing back the money. He asks Jessie to tell him what he was thinking, he tells Jessie that it isn’t sensible. Jessie just sits there and tells him that it’s a lot of money, Walt then tells him it is and says it is his money. Jessie won’t look him in the eyes, Walter sits on the other side of him and talks about Sharp who was the boy that was killed. Walt tells him it’s the past and that he should move on because nothing can change what they did; he tells Jessie that he’s out and so is he. Walter tells him they can only try to live ordinary lives now.

Walter asks why he’d give the money to Mike’s grand-daughter, Jessie says he can’t believing that Mike is dead and that Walter already knows that. Walt says he doesn’t know, he tells Jessie that he did not kill Mike. He says the last time he saw him was when giving his money to Mike and seeing him drive off.

Walter says that if Mike does come back and doesn’t understand what he did then he will take responsibility for his actions, he tells Jessie that it’s fine and that he needs Jessie to believe him. Jessie doesn’t look pleased still.

Skyler asks Junior what he’s planning for college. Skyler announces that Hank is still sick and they will have to cancel bowling. Walter excuses himself from the table and goes to see if he has any medication left; but he instead throws up into the sink. Walter then takes a look at the magazines in the washroom, he checks for the book and realizes it’s gone. He goes searching for it and then asks Skyler where it is, she says she never even knew they had it.

Walter asks that maybe Junior took it, he gets into bed and Skyler doesn’t believe that Junior would. Walter asks what’s wrong with Hank, she mention how he hasn’t been to work all week and Walter then goes out in the middle of the night. Walter goes over to one of the cars in the driveway and starts checking if it is bugged. He finds something underneath one of the cars and realizes that he’s being tracked. A homeless man is looking through some garbage, he then sees a car with someone sleeping inside of it; he knocks on it and it’s Jessie. He asks Jessie for change, he then tells him to come back over; he reaches into the bag and hands the man a bunch of cash. The homeless man takes it though he was very skeptical. Jessie then drives off.

Jessie starts driving down the street throwing money in front of a the houses of a poor neighborhood.

Hank is collecting more boxes for his personal research, Walter drives on over and Hank has a look of disbelief. Hank starts hiding all of his work into a box. Walter comes in smiling and asks how he’s feeling, he then asks if he’s seen a doctor and then Hank plays it off that he’s fine.

Hank then asks about the car wash and he says it was fine; Walter then says he should go but if there is anything he can do he’s willing to help. Walter then stops in the driveway and tells him that he’ll laugh but shows him a GPS tracker that was on his car. Walter asks if he knows anything about it, Hank the closes the garage door behind Walter. Hank is giving him a deadly glare and punches him in the face; Hank says it’s been Walt all along. Walter tells Hank his cancer is back and he tells him to rot; Walter says he’s back on chemo and tells Hank in six months he will have no one to prosecute. He tells Walter he’s a dying man who runs a car wash, he swears that’s all he is. Hank tells Walter that he should ask Skyler to bring the kids over and they will talk. Hank then says he doesn’t know who he is talking to, Walter then tells him if he doesn’t then maybe it’s his best course is to tread lightly.