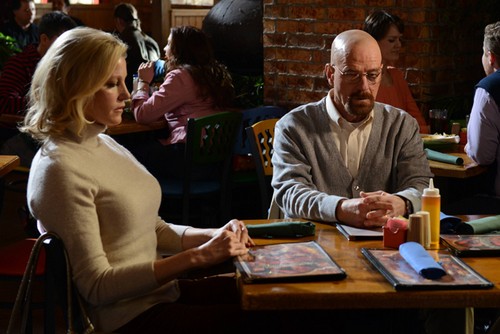 On last night’s episode 11 of BREAKING BAD Todd is in a diner and calls Walt to inform him about “the change in management” and that Walt needs to call him for all the details. (This can’t be good). Now Todd and his big blabber mouth is spouting off to two guys about what he did for Jesse and Walt during the train incident. Todd tells them how they stole from the train, that nobody ever knew, and therefore it was the perfect heist (that’s what they thought in Reservoir Dogs and we all saw how that turned out in the end). The two ask Todd if he is ready to make some Meth. Of course he is, so off they go on their way to New Mexico.

Jesse is getting interrogated. Hank walks in the room and turns off he camera. Hank ask Jesse how he is doing. Hank eventually offers to help Jesse. Hank ask him about Heisenburg and then tells Jesse he knows its Walter. Hank tells Jesse if he helps him he will let him go free. Jesse tells Hank he will have to beat it out of him. Hank gets up close and personal with Jesse and tells him he knows Walter must have done something bad to him because happy people don’t throw millions of dollars around. All Hank wants is Jesses help to put Walter away. Jesse tells Hank he doesn’t want to talk and then Saul walks in and tells everybody else to get out. Saul ask Jesse what he said to Hank. Jesse tells him he needs to chill.

Hank gets home and tells Marie he hasn’t told anybody about Walter yet. She thinks that he should and as soon as possible. Hank thinks she should be telling him how to his job. (Marie is right, the sooner the better).

Walter is in his room with a camera pointed at him. Walters states his full name and then says that this is his confession (hmmmmmmm……..).

Walter and Skyler are sitting together in a restaurant. Hank and Marie walk in. Walter thanks them for coming. Walter goes on to tell the that their concern is misplaced and that trying to get junior to leave home was wrong. Walter wants them to leave his children out of it. Hank tells Walter that Junior will find out about it when he kicks in his front door and arrest him (that I would love love love to see). Marie wants to know how Skyler can just sit there and listen. Skyler tell Marie that what he did is in his past ( talk about denial). Walter lets them know that Junior already knows about his cancer and that it wouldn’t be fair to throw all this at him to. Walter wants to know what he can do to fix all this. Marie suggest that he could die (real nice). Hank lets Walter know he won’t be getting off that easy. Ditto for Skyler if she keeps up with this charade as well. Walter gets up and tells Skyler they should go, before he leaves he hands Hank a cd. When Hank gets home he pops in the cd (and boy is he in for a treat). It’s Walters taped confession he was making earlier and in it he states that Hank is the mastermind of everything from the Meth to using Walter as a scapegoat.(I wonder how many copies Walter has of this or more importantly to whom are they for?) Hank and Marie look on in absolute shock, Walter even brings up how Hank threatened his family (well played Walter, well played). But wait there’s more , Walter states that Hk is the one who killed Gustavo, he explains how he made the bomb for the hit. Marie wants to know who Walter would show that cd to (me to). Hank assures her it’s a threat (agreed and I’m pretty damn sure it isn’t a empty one). Hank the ask Marie about Walter saying something about paying his medical bills when he got injured. Hank slowly realizes that Marie borrowed the money from Walter. Marie wants o know what they should do (how about not borrowing money from drug dealers).

Jesse and Saul are hanging out in the desert. A car drives up and Walter gets out. He walks over to Jesse’s car and starts looking around for a tracking device (he doesn’t find one). Walter wants to know from Jesse what Hank knows. Jesse tells him he knows he is Heisenburg. Jesse tells Walter that Hank wants him to tell him about everything that Walter has done. Walter tell Saul to go for a walk. Walter wants to know if he can help Jesse, he tells Jesse he should leave town and never look back. Walter tells him he knows a guy who can give him a brand new identity and life. Walter tells Jesse he should find a job he likes and start a family of his own. (What is Walter up to?)
Jesse tells him to quit the whole concerned dad thing because he isn’t buying it. Jesse feels that Walter wants him to leave because his brother won’t. Jesse thinks they are in the desert because if he turns down Walter than he will kill him just like he did Mike. Walter just walks up to Jesse and gives him a hug.

Walter is at the gas station and he ask Skyler if she can watch the register since he has his chemo in a bit. Skyler is not in a talkative mood. Walter tells her that it worked and that they are fine.

Hank is looking through a bunch of papers when Ramirez comes in and ask him what exactly is going on since he is the one following Jesse. Hank tells him to leave. Hank looks around his office frustrated he the leaves s office and on the way out he tells the secretary to reschedule a appointment that he had.

Saul is with Jesse and ask him of there is anyone he wants to say goodbye too. There isn’t. Saul then makes the call to the new life guy. When Saul gets off the phone he gives Jesse some money for his old life and the some money for his new life. Jesse lights up a joint and Saul tells him to stop because they guy wont accept him high. Saul then ask for the weed and Jesse puts it in his pocket (you know for later). Saul gets a bag for the cash and starts putting the cash in it. He hands Jesse a phone (and just not any phone mind you, it’s got hello freaking kitty on it). Saul tells him to wait for guy and that Florida is nice. Jesse prefers Alaska. Saul shakes his hand and tells him to take care. While Jesse is standing around he starts feeling around in his stuff and notices something isn’t quite right with his cigarettes. Jesse picks up the money and walks away from the van.
Jesse walks back into the office and proceeds to beat the living sh**t out of Saul.
Jesse gets a gun and tells Saul that the ricin cigarettes were stolen from him. Jesse also says that’s hoe Walter poisoned Brock. Saul tells Jesse he took the cigarette but didn’t know what Walter was going to do with it. Jesse takes Saul’s car keys and walks out. Saul calls Walter and tells him that they have a problem.

Walters at the car wash looking anxious, he walks over to a soda machine and takes a dust covered gun out of it ( no worries though because its loaded). Walter says he needs to get prescription and he leaves.

Jesse drives up to Walters house, he breaks down the door and starts pouring gasoline all over the damn place.