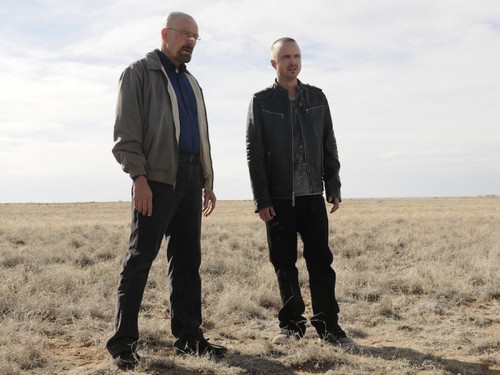 Tonight’s episode of BREAKING BAD was all about Jesse and what Walter was going to do about him.  Although Saul and Skylar wanted Walter to get rid of Jesse, Walter still had a loyalty to Jesse, at least until the end of tonight’s episode.  If you are curious about next week’s episode we have managed to get our hands on a sneak peek video and a few spoilers to whet your appetite for next week’s episode 13 “To’hajiilee.”

On tonight’s episode Walter came to his house looking for Jesse.  When he got there he saw an empty gas tank on the ground but no Jesse.  When Walter spoke to Saul he suggested that perhaps it is time to get rid of Jesse.  Walter was not pleased and warned Saul not to bring eliminating Jesse up again.  Walt wanted to find Jesse and make him see reason, he really wanted Jesse to start a new life and move on.  Skylar found out about Jesse, she told Walt he can’t just talk to Jesse anymore.  Skylar felt they came so far, what is one more death.  We also found out  that the reason Jesse did not burn down Walter’s house was because Hank stopped him.  Hank talked Jesse into helping him bring down Walter.  When Walter called Jesse for a meeting to talk things out Hank decided to wire Jesse and try to get some evidence on Walter.  Jesse decided to do things his way and put Walter on notice after mistakenly thinking Walter set him up.  So much more happen and if you missed the episode, head over to read our full and detailed recap here!

Spoiler alert: If you’re one of those people who doesn’t like spoilers, stop reading now! We have some juicy spoilers for you about the season 5 episode 13 of AMC’s “Breaking Bad”

Official Showtime synopsis of next week’s episode:  “Things heat up for Walter White in unexpected ways.”

On next week’s show it looks like any feelings that Walter had for Jesse are fast coming to an end and a showdown is coming between the two.  Walter knows that Jesse is out to get him and he has to get Jesse first, it is a question of survival.   Walter call’s Todd’s uncle to do a job.  Walter does not know where Jesse is.

This is all a result of last week’s episode.  Jesse went to meet Walter and when he arrived at the meet he thought he saw a hitman and thought he was being setup.  That caused Jesse to forget all the feelings/loyalty he had to Walt.

Meanwhile Jesse think he has come up with a good way to take Walter down and tells Hank.

Next week’s episode is called, To’hajiilee and this is the name of a Navajo reservation in New Mexico.  It was the site of Walt and Jesse’s first cooking session, as well as the burial place of Walt’s money.

Breaking Bad episode 13, “To’hajiilee” airs on AMC on September 8th, 2012.   Check out the preview video below of episode 11 and let us know in the comments below what you think!  Are you enjoying season 5 of Breaking Bad?