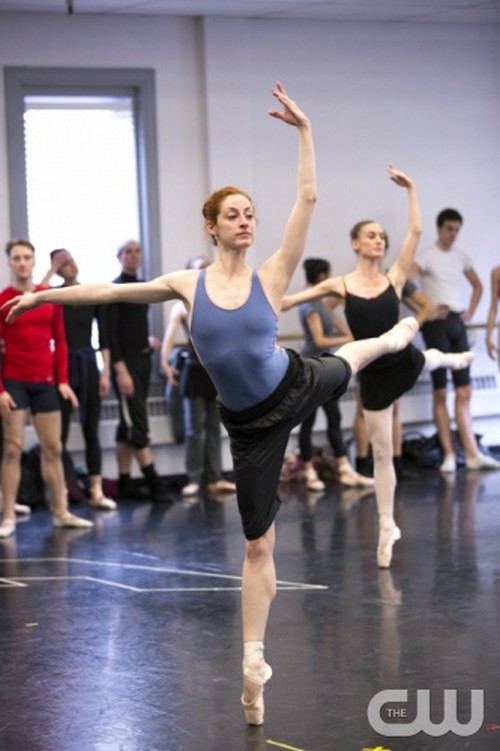 Tonight on the CW BREAKING POINTE continues with a new episode called, “Nowhere Near Ready.”  If you have never watched the show Breaking Pointe rips back the curtain on the inner workings of elite Salt Lake City Ballet Company, Ballet West. It obliterates the notion that ballet is a dated art form and shatters pre-conceived stereotypes about the men and women who give their lives to the world of ballet. Beneath their perfect exteriors, these dancers have the toughness of linebackers, punishing their bodies to achieve perfection and dancing through injuries and pain.

On last week’s show With contract renewals around the corner, the rivalry between Zach and Ian continues as they fight for a spot in the main company. Allison returns from Detroit more confused than ever about her future. Beckanne has a hard time staying focused and confides in her best friend Katie. Meanwhile, the dancers find out the fate of their future at Ballet West.

On tonight’s show With contract renewals over, the dancers focus their attention on the upcoming opening night of “Cinderella.” When Allison doesn’t get the support she needs from Jonathan, she turns to Rex. Meanwhile, Beckanne returns to her former ballet school in Philadelphia to seek guidance from her mentors. Amidst the pressure building in both her personal and professional life, Christiana suffers an injury that puts everyone on edge.

The show begins with Company Class in Salt Lake City, Utah. Chris talks about the pressure of being in Cinderella as well as his relationship with Christiana. Christiana for her part is worried about Rex because she can’t dance with anyone but him and if he can’t dance she is done. Rex thinks his injury is setting him up to fail. The Cinderella performance is going to get him promoted but his injury could prevent that from happening. Allison is conflicted about staying with Ballet West or leaving to go be with Jonathan.

During the class Zach reveals he got a promoted into the main company. He is very excited. Ian did not get a contract is annoyed at listening to how happy Zach is that he got a contract. Ian intends to get a job despite not getting a contract.

Rex and Allison think it is funny that people don’t really know what is going on with them. They are broken up but they totally trust each other when it comes to dance. They both agree it is weird to be around your ex all the time. Beckanne says they have an unconditional connection that everyone can see.

Cinderella rehearsal takes place and Christiana is worried about Rex’s foot. She is depending on him for her to succeed. His foot ends up hurting so bad he has to mark part of the rehearsal instead of dancing through it. It is frustrating for both of them. The opening night is one week away making their tensions rise. Not knowing what is going to happen with Rex is weighing on Christiana heavily. She point blanks asks Rex about his foot. He tells her he is trying not to worry about it and gets a annoyed at how much pressure she is putting on him. He knows what is at stake but her reminding him doesn’t help. Christiana tells him it is all about him and it does affect a lot of people. In the end she tells him she needs him to step it up and go out and kill it. He tells her he can handle it.

During stepsister rehearsal Chris talks about how important being a director is to him and how it is hard to divide his time between, Christiana, dance and directing. The rehearsal does not go well and has Chris realizing just how much Christiana has done for him over the years when it comes to dance.

Beckanne and Allison chat. Beckanne reveals she is going to see the directors at The Rock. She feels she has been in a rut. She is not as excited about dancing as she feels like she should be. It is like she has lost her passion for dance. Allison reveals that she is at that point where she has to decide but that she loves it. The talk turns to Chase and Beckanne and how he is looking to move to another company because he is not happy at Ballet West.

Josh and Rex hang out at Josh’s place playing pool and talking about Rex and Allison. Rex says he and Allison will always be friends and that is cool but he can also see at some point things getting messy. It all goes back to ballet.

Katie and Beckanne head to Philadelphia to visit Beckanne’s old school The Rock. She is excited to see her old mentors Beau and Stephanie. The girls take a class and Beckanne talks about how she spent all four years of high-school at The Rock boarding school. Beckanne’s picture is all over the school. She enjoys watching all the new young students at the school and reminds Beckanne she is a professional. It also ignites her love for dance again. She is now sure she is on the right path.

Back in Salt Lake City, Zach gets professional photos taken alone and with Kim. It goes well and he loves being the center of attention.

Allison goes out with her pal Gloria to talk about Jonathan. Gloria tells Allison she is worried about her and Jonathan. Allison thinks that Jonathan doesn’t really want her to quit ballet but he really doesn’t want her to be around Rex. Allison is freaked out because she doesn’t want to be alone. Gloria tells her to not give up her dream for someone else’s dream. Allison decides to go with the flow and says the next step is that Jonathan has to come see her dance.

Rex and Allison talk about her relationship with Jonathan. She cries as she realizes that she gets more support from Rex than Jonathan. Christiana is nervous that Rex’s focus is on Allison and not the rehearsal. Christiana is also worried about the pressure the show is putting on her and Chris. She calls her brother for advice and decides that she needs to get away and be on her own for a while. Christiana decides after Cinderella is over she is going to focus on herself.

Allison is aware of the stress Christiana is under. She sees her break down and talks to her. Allison says she is being very professional considering the situation she is in. Christiana is worried about letting Adam down. Allison reminds her that what mater is what she is doing in the studio and she is killing it. Christiana reveals she is trying hard to keep the personal stuff outside the studio but it is starting to crash down around her.

Adam and Chris have a chat about how Chris wants to do so much but feels like he is stressed out. He is a principal dancer as well as director and that is a lot of responsibility. Chris is also trying to understand what Christiana needs but he knows she is not happy. He thinks he tried so hard to strive for perfection in his job he didn’t listen or pay enough attention to her. He reveals if he is not giving her what she needs he will have to let her go.

Adam is not happy with the rehearsals and issues with his dancers. From injuries to their personal lives it is all affecting the show and he does not know how they will be able to pull the show off in the short amount of time before opening night.