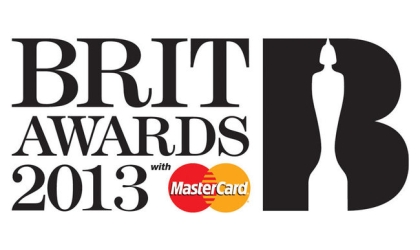 The biggest event in the British music Industry’s Calendar, the BRIT Awards 2013 is being held today. This will be the 33rd edition of the British Phonographic Industry’s annual pop music awards. The award ceremony will be held at The O2 Arena in London, and will be presented by James Corden.  As usual, we will have all the red carpet arrival photos as they become available for you enjoyment.

Leading the nominations this year is 25-year-old singer, Emeli Sande.  She was nominated for British Female, British Album for ‘Our Version Of Events’and her songs ‘Next To Me’ and the collaboration with Labrinth, ‘Beneath Your Beautiful’ are up for British Single.

Mumford & Sons and Alt-J also received three nominations each with Rita Ora, Muse, Plan B, Jessie Ware, Ben Howard, Coldplay, Paloma Faith and Olly Murs all up for two awards.  Rihanna will battle it out for the International Female gong with Alicia Keys, Cat Power, Lana Del Rey and Taylor Swift while Jack White, Gotye, Michael Buble, Frank Ocean and Bruce Springsteen are all up for International Male.

Muse, Robbie Williams, Emeli, Mumford & Sons, Ben Howard and One Direction are expected to perform at the ceremony.

So sit back, relax and enjoy the photos.  Make sure to refresh often to get the most current updates.  You don’t want to miss any of my comments on their attire!  As usual, if you don’t agree with my comments, leave me a comment and let me know!

Live recap of red carpet!  Refresh often, to get the most current updates!

1) Dressed looking very smart in his purple suit, Robbie Williams just showed up to the red carpet. Robbie says: “I am very excited to see One Direction perform” at tonight’s show. Ooh – wonder what Taylor Swift makes of that comment. Ha

2) Wowza!! Jessie J looks smokin’ hot in her black dress, showing a lot of cleavage and has finally ditched her bangs for a more “natural” look. Looking fresh-faced and baring it all for the photogs, Jessie looks far from stressed out when we saw her earlier this week arriving late to ‘The Voice UK’ auditions where she supposedly took TWO HOURS to get there. Yikes! LOLz.

3) Taylor Swift has just showed up, kinda wearing the EXACT same dress that Jessie J is wearing. What is going on? Did they share each other’s ideas or why else would she have chosen the same outfit!? Ooh – we can’t wait to see what happens when they run into each other.

4)  Boy George… hmm,- a legend in our minds but once we saw him arrive at The Brits… wow! This is not a look we can appreciate from a ‘legend’. WHAT IS THIS!? A blue blazer, a messy fugly-looking hat and a pair of black trousers. Yeah – not feeling this look from Mr. Boy George. 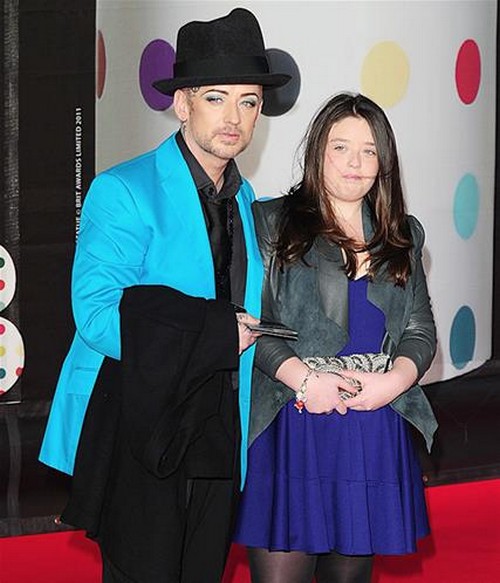 5) Ne-Yo just showed up and didn’t hold back with a quick interview on the carpet, saying: “I’ma be eating real good tonight at the show.. that’s what I’m here for, right? I’m looking forward to tonight’s performances,- One Direction should be fun to watch.”

6) The One Direction boys are in the building, and Harry Styles looks really bad – I’m sorry, but what is up with his hair? Currently holding an interview, all you can hear is girls screaming: “NIALL”. Ah, we can’t understand a word they are saying — all we hear is girls chanting: “1D Rocks, 1D, Rocks”. 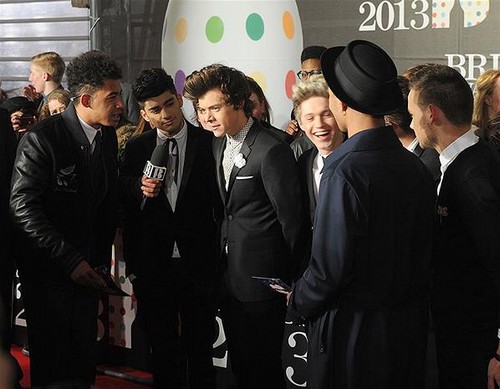 7) Let’s not forget Ms. Taylor is on the red carpet, too. I hope she runs into Harry to see how awkward things are going to get between the two… or will she try and give him a hug, while he tries to brush her off?! Ahh – this should be good.

8)Rita Whora- Oops! Rita Ora just arrived at the carpet, looking like a hot mess. It looks like she never bothered getting some tips from Kim Kardashian while she was dating Rob Kardashian — what a bad move, because she has a terrible taste in style. That dress is definitely three sizes too big for her. It looks like something Jennifer Hudson would wear… BEFORE she lost 100lbs. Ha. 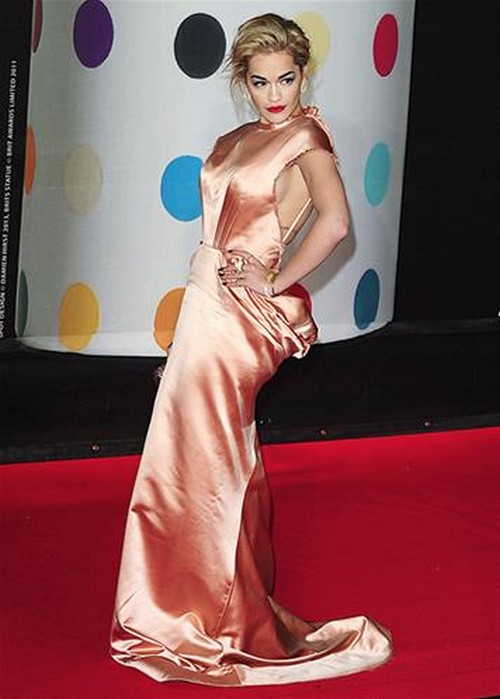 “I have three changes for tonight’s event,” Rita explained just now after having changed her first dress into a white gown by Gucci. The singer is has three nominations at this year’s show, while her favorite one she wants to win tonight would be ‘Breakthrough Artist of the Year’.

9) Justin Timberlake arrives at the show, looking very smart in his grey suit. The singer arrived at the show with his wife Jessica Biel, yet she seemed to have ditched the red carpet — probably because she couldn’t be bothered to get dressed up for the event and just wanted to support her hubby. Awww, how sweet!

[CLICK ON THE THUMBNAILS BELOW TO MAKE THE PHOTOS LARGER]