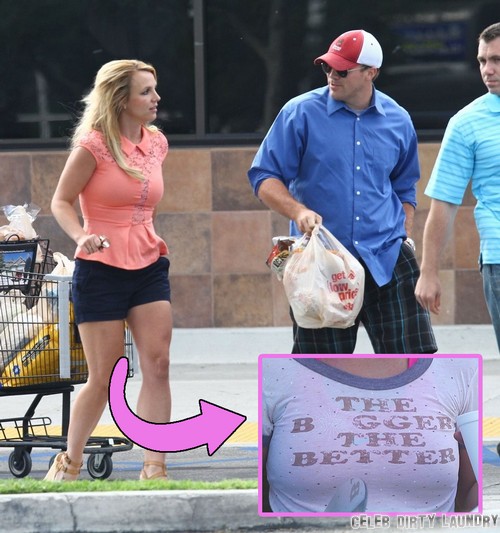 Is Britney Spears engaged? That’s the word around the street after Britney stepped out in a t-shirt with a sparkling diamond design on the front, with the words ‘the bigger the better‘ engraved on top. Could she have been sending a message to boyfriend David Lucado?

Britney and David starting dating a couple of months ago, but it’s been less than a year since she’s broken off her engagement to Jason Trawick. Could she even be ready to jump into another long-term commitment by then? What am I saying, of course she is – it’s Britney Spears.

Spears previously got engaged to Jason Trawick after a couple of years of dating, but that relationship was creepy for more than one reason. As someone who was supposed to look out for her and manage her career, the lines were blurred and I don’t blame Jason for running away. And obviously, we know about Britney’s history with Kevin Federline.

And while David may be the right match, I don’t think she should jump into anything right now, despite what her shirt says. Britney’s busy with her career and her new album, not to mention her performances in Vegas. Does she have time to prep for another marriage?

So while her shirt may be hinting at her desire to get married, I think it’s the media reading too much into things, as usual. I don’t think Britney’s ever been the type of girl to initiate an engagement or a proposal, although I think she is very quick to say yes if she ever receives one. In this particular case, she’s been dating David for less than a year, so she needs to be sure he’s not after her money before they get engaged or become really serious. I think her parents and family agree, and hopefully they’ll be there to prevent her from making any hasty decisions.