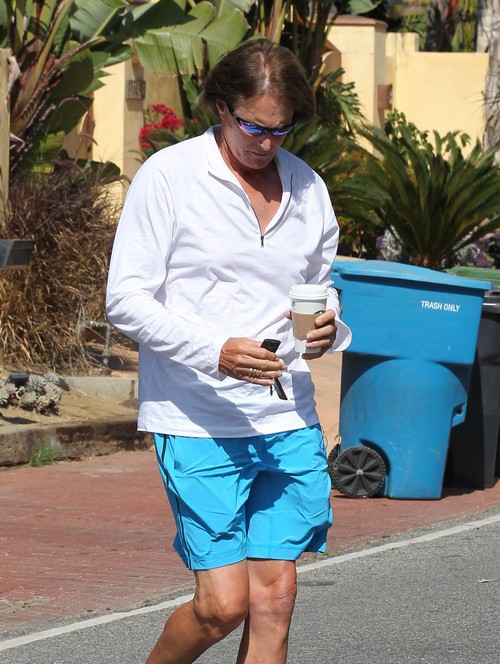 Bruce Jenner has been seen walking the streets in Calabasas with his nose bandaged up after undergoing surgery for skin cancer.

Bruce’s diagnoses has the Kardashian girls praying that they are not going to lose another father. On the other hand, wife Kris Jenner can’t be taking the news well as there is now no possible way that she can divorce Bruce.  With her husband having cancer she fears that that her children could turn against her which would result in her losing her “cash cows” – and in the case of Kylie and Kendall, “cask calves.”

It is no surprise that Bruce and Kris’s marriage has been over for quite some time and the two are now living apart. The reason for the breakup is that Bruce apparently cannot stand that his wife is an over-obsessed media whore who has now amassed a whopping $160 million dollar fortune from exploiting her children.

The surgery Bruce underwent looks pretty serious for skin cancer on his nose and this is not the first time; he actually went through similar surgery on the side of his face back in 2012. All this apparently from being out in the sun too much.

Now that the cancer has spread, Bruce must be worried if the cancer will continue to appear in other places or spread to vital organs and kill him. Bruce has admitted that his nose was starting to look like Michael Jackson’s before the surgery, I can’t imagine what his nose is going to look like afterwards considering he has now got 30 stitches and he has already undergone cosmetic surgery in the past on his nose.

In any case, hopefully Kris can dig deep and support Bruce while he is going though this tragic diagnoses; but I doubt it, unless she can make money off of his troubles.