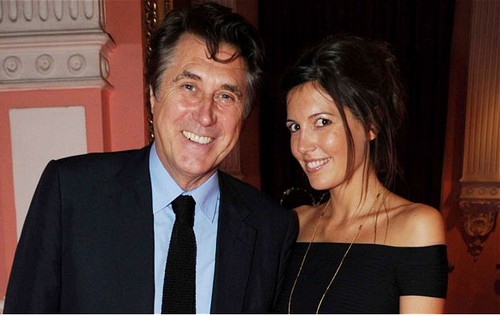 Bryan Ferry a man who’s well known for being an English musician, singer and for being the lead vocalist and songwriter for the band Roxy Music has separated from his young wife after 19 months of being married. Bryan’s at the age of 67 married a woman by the name of Amanda Shepard who’s currently 30 years old; she’s three decades and seven years younger than him, recently they’ve separated and there’s no surprise from it either.

It turns out that Bryan Ferry was introduced to Amanda Shepard by one of his sons – she was his son’s girlfriend before she was Bryan’s wife – gross, yes! During the time when they were together Bryan said “The interesting thing is, and I don’t want to say the wrong thing in case I get into trouble with my girlfriend – you never really meet people your own age who aren’t married. I’m very fortunate that I work in music, where you’re in touch with different age groups, either the audience or people you work with. It does help. Obviously I’m not ageist!”

Bryan first dated Jerry Hall for about two years starting from 1975-1977 until she left him for Mick Jagger. Later on, Mick mentioned how he saved her from becoming Jerry Ferry which was a very nice save.

Amanda’s is the second marriage that Bryan Ferry is involved with – his last marriage was with Lucy Helmore in 1982 and even this first marriage was with a much younger women – fourteen years to be exact – and with whom he had his four current children. Lucy was on the cover of their Roxy Music’s album Avalon which I assumed is how they met.

It was inevitable that the marriage between Bryan Ferry and Amanda Shepard wouldn’t last, he’s old, lonely and has a ton of money; there are young women who are willing to date or marry a man for those very reasons… especially the money part.