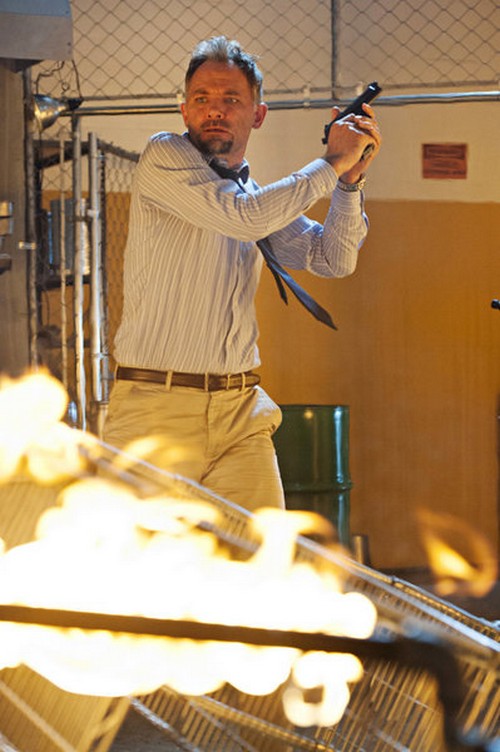 Tonight on the USA Network Burn Notice continues with a new episode called, “Bitter Pill.”  On tonight’s show Madeline takes action when she suspects she’s being followed.  Did you watch last week’s episode?  You can read a full and detailed review right here.

If you have never seen the show before this season Michael’s past and present collide as he tries to rebuild relationships with his family and friends while pursuing a dangerous mission involving the CIA and a lethal network of operatives.  The show stars Jeffrey Donovan, Gabrielle Anwar, Bruce Campbell, Coby Bell, Sharon Gless.

On last week’s show Michael goes after a drug smuggler at the bidding of the organization he’s trying to infiltrate. Elsewhere, Fiona, Jesse and Strong visit a mental hospital in a search for more information about James.

On tonight’s show the team look for an antidote at the manufacturer’s lab in order to save a poisoned Middle Eastern diplomat. Elsewhere, Madeline takes action when she suspects she’s being followed.

Michael’s long con on James is starting to affect him. That’s the problem with long cons they begin to make you doubt yourself. Michael knows this and he fears its happening to him when suddenly James sends two of his henchmen over to collect him.

They take him to a warehouse where Sam, Fiona, and Jesse are there waiting. They’re surrounded three to one but Fiona wants to fight and Michael tells her to trust James. This turned out to be a good thing. What they thought was their execution was actually a test. James wanted to test them before he sent them out on a job. Their job is to save a man’s life. They have to save Dr. Omar Hamed from assassination.

Omar isn’t connected to him but if he dies a war would start that would naturally affect his business. The group will be sent out to protect Omar with one James’s colleagues, Ben, following. This is Ben’s first time in the field and by the way Michael saw his hands; Ben’s nervous. That won’t bode too well once they’re in action.

Back at home, Madeline is furious. The goons had collected Fiona at her house while her grandson was with her. Before she was used to people following her and knowing her movement however she refuses to have that part of her life. She has Charlie to look after.

Michael doesn’t have time to wonder what his mom will do. He has to protect Dr. Omar. Everyone is surrounding the doctor at his event. At first everything is calmed and the guys are starting to think this whole mission was overhyped worry when they identify their possible killer. It’s a waiter butt as they finally are able to corner him; he gets shot down by his own people. Sadly what the gang didn’t know until it was too late was that the waiter had already poisoned Omar.

They get him to special pop up hospital set up by James but there’s only thing to save Omar. They have to get the antidote. The chances of getting the antidote are nearly as dead as the waiter or so they thought. Retracing the waiter footsteps they were able to find the guy that supplied him with the poison. He’s a strip club owner.

Jesse and Fiona go in undercover. They pretend to be drug pushers. They get sent in wit a ton of ecstasy and a hundred grand in cash. James apparently has a warehouse of valuables including some marked by the Chinese army and biohazards signs. Fiona and Jesse are able to kidnapped Khalid, the club owner. Nevertheless Khalid continues to be stubborn about the antidote so Ben injects him with poison. That makes him open up.

Madeline is still freaked about people following her. She tries and set trap for one of them but the guy refuses to answer her questions and she’s not brave enough to shoot him so he walks. She’s on edge though. James takes it upon himself to be the one to calm her down. He makes a surprise visit at her house. She agrees to his “protection” but she is a Weston. She doesn’t anymore surprise or else she will shoot him.

Khalid takes Ben, Jesse, and Fiona to his warehouse for the cure. They get the cure and Khalid was about to take it when Ben stops him. He says it would stop Khalid from coming after Omar on another day. Khalid attacks him and tries to escape only to have Ben shoot him. The gunshots alert Khalid’s security team and they have the guys surrounded inside of the warehouse.

They make a plan. Jesse out first, then Ben, followed by Fiona. It was a good idea and it could have if there weren’t oxygen tanks in the building. The tanks explode and Fiona is trapped by the fire. She asks Ben to help her and the coward flees leaving Fiona inside. Yet once he’s free he tells them they should just go. Nothing can save Fiona.

Michael can’t right off Fiona was dead. Given the options, what’s a good hero to do? He’s going to run into the burning building for the great love of his life. He was extremely blessed to not only find her but also not die alongside her. Michael is able to carry her to safety.

Fiona is being looked after at the pop-up hospital. She suffered bag inhalation at the most. Michael in contrast actually has a war wound. He hurt his hand.

James considers it an overall successful mission except one thing. Ben wasn’t supposed to leave anyone behind. He had promised this to James. Thus James feels Ben failed him. James shoots him. Michael at first tried to help Ben but when push came to shove he didn’t say anything as the man died.
Is this who Michael has become?