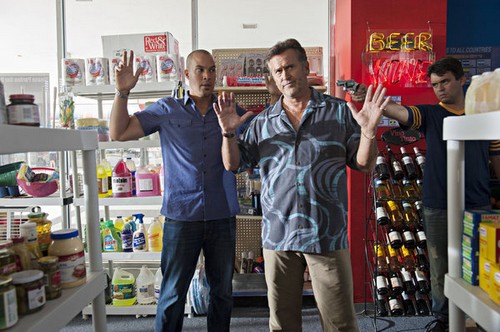 Tonight on the USA Network BURN NOTICE after seven seasons it is time to say goodbye to our favorite characters Michael and Fiona as the series comes to an end.   Tonight’s series finale is called, “Reckoning” and you know we will be tuning in!  Did you watch the last episode? You can read a full and detailed review right here.

Star Jeffrey Donovan spoke about the finale to Showbiz Tonight and said, “There’s a very tight-knit family of cast members. and one of us dies in the series finale.  It’s a tragic death, but also a heroic death. But when people watch it, they’ll realize it was a necessary death.”  Sounds like we better get our box of Kleenex ready.

On last week’s episode Michael had to expose his identity to James and Sonya. Meanwhile, Fiona, Sam and Jesse formed a plan to retrieve Michael.

On tonight’s series finale Michael Westin will be forced to choose between his allegiance to James’ terrorist organization and his volatile lover Fiona.  Michael must regain the trust of those closest to him in order to finish what he started.

RECAP: Michael is talking about how being a spy for so long has such a negative affect on your friends and the pople you work with. Michael shoots Sonya before she shoots Fiona. James tells all his men what Michael has done and that he made a mistake. He orders all of them to take them out with no mercy. Michael and Fione are trying to escape the building while Jame’s men are laying down heavy fire against them. Jesse and Sam pull up in their humvee to extract them and they drive off while being shot at. Sam, Jesse, Michael and Fiona are talking about what step they’re going to take next. Michael tells them to get his mother and Charlie out of there and to safety. They tell Michael that they’re not going to leave him behind and that they need to get going. Michael is saying that in the field that there’s nothing worse than letting your team down but that you have to stay focused and keep your mind off the past. Michael is saying that he almost didn’t pull the trigger. Fiona says it didn’t matter because he did and that she knew he would come to his senses or it wouldn’t matter anyways. Sam and Jesse are trying to buy some supplies from a gae station when the shop owner and his employee pull guns on them because they’re on the tv and the police have a regard out for them. Michael and Fiona see what’s happening and decide to go in to rescue them. Fiona gets out and Michael stays in the car to ram it through the window of the store. Same takes one out as he shoots Michael. They all get back in the car and drive off. Michael calls Andrew Strong to get the police to call of the manhunt for them. Strong tells Michael that there’s nothing he can do for them because he ruined the assignment and his career. He threatens him with what his about to happen to him and that being burned was nothing compared to what was coming next.

Michael’s plan is to get James because it’s the only card that they have left to play for their own safety. He tries to send them off again but they say that they’ll take care of finding out where James is and the he needs to go and see his mother. He gets there and she looks worried as he tells her it’s okay because Fiona got to him before it was too late. He gives her an emergency phone while she’s getting upset. They hug and Michael leaves as she starts to cry. Jesse pulls out the information he found on James with a lead to him. They’re plan is to pick him up in transit from his safe house to a naval base. Michael tells Jesse that he needs to him to watch out for Charlie and his mother because he can’t worry about both and execute the mission the way the he wants. Sam and Fiona are getting ready to intercept Jame’s safe-house designer. Sam’s pressure bomb fails to go off and his shotgun rounds fail to go through because the car is armored. Fiona and Michael are chasing the car. Michael takes one of their small bombs, jumps onto the car and places it under a wheel well. The car flips and Michael holds him at gunpoint trying to get the information about James’ safe house. He tells Michael where it is and he tells him that he’s going to take them there.

Sam is telling that James has a communication center outside of the building that brought them to. The designer tells him it’s just a relay station as Michael tries to get more information. They’re plan is to grab the hard drives to bring to the CIA for the intelligence on Jame’s network. They try to talk some sense into Michael before they breach in but he isn’t having it. He says they’re wasting time and blows the wall. They’re walking through the building searching for the comm center.Jesse is with Michael’s mom making sure they are set up until they find a safe place to stay.She asks him why he’s still helping Michael and the CIA after they have not made his life easy. He tells her about his mother dying and that he’s still there because they’re the only family he has left. James calls Michael after he grabs the hard drives. James says that they are outside the room that they are in because he tracked the prepaid phones they bought. He tells them that he has men at his mother’s house. Michael tries to plead with him that it is between them two and to leave the rest out. James says that he is out of time. Michael calls his mother and she tells him him that she has a plan to get Jesse and Charlie out and away from the men outside. She tells him about some explosives that she has in the house but she has to stay to detonate it herself and that she doesn’t need him to protect her anymore. She loves him and is so very proud of him.. They share a warm good-bye as Michael is crying. Jesse tries to fight her decision but she tells him that it’s the only way for Charlie to escape. She tells Charlie good-bye as he leaves with Jesse. Jesse hugs her and she tells him to go.

Sam grabs the phone to call her back. They plan to take James out, get the hard drives to the CIA to use the second chance that his mom bought him. They walk out with hands up as James says he wants Fiona to watch Michael die. Michael and Fiona pull out guns from each other’s belts, take two of them out and head for cover. James orders his men into Michael’s mother’s house as the firefight ensues. They charge in on her with a detonator in her hand as she says, “This one is for my boys.” and presses the trigger. Sam is trying to escape with the hard drives. Michael and Fiona are out of ammo as James yells that this is over. Michael makes a plan with Fiona that’s a last ditch effort to save them both and the he wants to live. He charges out into another section of cover as Fiona takes out the last two of Jame’s guards. James is walking up to shoot Michael behind the crate he jumped to. Fiona throw her gun to him. He lays around the box and hits Jame’s twice. Michael says he’s going to take him in as James pulls out a “dead-man’s” switch. He says they could’ve done great things together and that he made a mistake. He drops the detonator and the building explodes. Sam makes it out just in time and watches the building go up in a large explosion.

Back at CIA headquarters Sam and Jesse are with Andrew Strong. They were in a detention area prior to their meeting. Strong says that a lot of people don’t want them let out but that they’re he heroes of this op and they are free to go.They go to leave as Strong tells them that Michael will have a star on the wall reserved for agents fallen in the line of duty. Michael narrates that a spies job is never really done until they’re dead. The scene shows Michael and Fiona escaping just ahead of the explosion and diving out into the water. Sam and Jesse wonder where they are and talk about what their going to do next. Sam has a job lined up and offers a job for Jesse to come with him. He salutes Michael’s grave as he wishes him luck wherever he is. Back at an isolated cabin, Michael and Fiona are sharing hot drinks with Charlie asleep on his lap. He asks Fiona what he will tell him when he’s older about himself. Fiona says to tell him the truth. He asks where he should start. Fiona says the beginning with: “My name is Michael Weston. I used to be a spy.” They share a long kiss and enjoy the fire as the scene fades away.