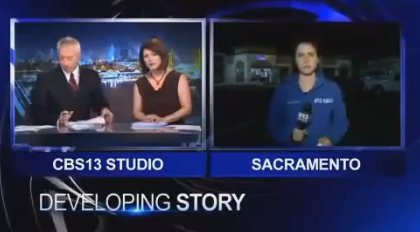 Another disturbing video has surfaced showing a police officers violently beating a man with a baton. The unidentified white man in his 40’s has died while in police custody after being hit 10 times in Sacramento Friday. The sad part is the unidentified man was beaten by the female while a male cop held him down.

Officers had been called to the city’s Metro PCS store in Folsom Boulevard on Friday, after reports that a shop assistant was in danger. After the police arrived they attempted to handcuff the man, and a violent struggle ensued. A video was obtained by CBS13 from a shopper that witnessed the incident which shows the entire beat down on tape for everyone to see and decided have police officers and people in high profile position taking the law too far.

CBS Sacramento reports: According to the police press release, pepper spray and multiple baton strikes were used to free an officer that was in the suspect’s grasp.

The Sacramento Police Department (SPD) has launched an investigation to include the department’s homicide, internal affairs and crime scene investigation units, as well as the city’s office of public safety and accountability and the district attorney’s office into the unidentified man’s death. The two officers involved have been placed on paid administrative leave.

The SPD has not yet released autopsy reports. Regardless of the why, the man’s death does not justify or dismiss the brutal beat down by the SPD on a human being. What another horrible instance of police brutality.