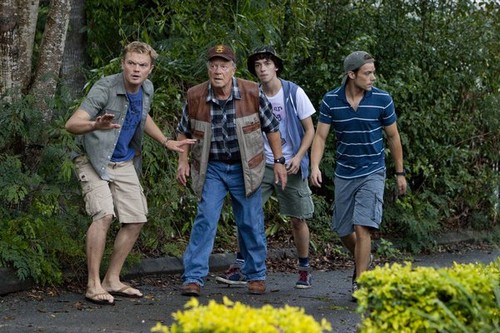 Tonight NBC’s new dramedy CAMP continues with a new episode called, “Harvest Moon.”  On tonight’s show Robbie (Tim Pocock) spots Sarah (Dena Kaplan) over at Ridgefield and is disgusted to learn that she is now working for Roger (Rodger Corser).

On last week’s show Mack announced that the new Mayor was performing same-sex marriages and was encouraging everyone to marry before the State repelled. Mack volunteered to host the wedding at Little Otter for Raffi and Todd, who hesitantly agrees after Grace’s  heartfelt plea. The camp staff springs into action to prepare the camp for the best wedding ever. Roger insisted he throw the bachelor party in an effort to attract more gay people to Ridgefield. In the wake of her cheating scandal, Sarah founds herself being ostracized by Robbie’s supporters. After his health scare, Kip felt like he has a new lease on life and decided to break free from Chloe and pursue Marina  – the girl he really wants to be with. At the wedding party – with love in the air – Cole decided to finally make a move with Mack. Charles Grounds and Lily Sullivan also star.

Don’t forget to join us for our live recap tonight at 10:00pm of CAMP Season one on NBC. While you wait for the recap, let us know how your enjoying the new season of Camp.

RECAP: Buzz has his grandmother and grandfather come to visit; Robbie is eating with David and gets pissed off that there is no bacon with his pancakes. He goes into the back looking for Sarah and gets upset he can’t find her. Mackenzie introduces everyone to her grandfather. She talks with David and tells him to get the vines out of her flowers. Buzz is going crazy over Kip kissing a girl and believes she totally wants to go down on him; Grace says she doesn’t want that and the kiss could mean something else. Buzz says that he has to stop being so negative and go for Marina; Marina comes by and Buzz tells him to go for her. She is going over to Greg’s cabin and Buzz tells him to now worry. Marina goes to see Greg and he shows off his awesome cornrows.

Marina says that she is pregnant and Greg asks how she thinks this is possible, Marina tells him she is a week late and believes it is Greg’s; she asks him to drive her to the pharmacy for a pregnancy test. Greg makes an excuse and gives her his keys to his car; she can’t drive but takes them and leave anyways.

Buzz is out with his grandfather on the lake fishing, his grandfather says they are going to war and drives off. Marina goes to see Kip and asks if he can drive for her since she doesn’t have a drivers license. Mackenzie comes to check out on her dad and Buzz; her dad complains about the golf ball going into the lake. She says she can’t help it; Buzz goes to help his grandfather and he tells him to just let him to do it himself. Buzz goes back over and ties the boat to the dock better after it was coming loose.

Robbie and David talk about Sarah just disappearing, they go and find Buzz and his grandfather planning something in the shed; they decide to join in on the fun. Kip gets into Greg’s car with Marina; he asks her where to and she says to a drug store that is like 70 miles away. He asks what she’s buying and say that it’s a secret; she then promises to tell him if he tell nobody. She tells him she needs a pregnancy test and he accidentally backs up into a dumpster.

The two are on the road and it’s very awkward, Kip looks so uncomfortable, he swerves a bit and a cop cars sirens go off.

The cop pulls them over and Kip says that he doesn’t actually have his drivers license, Marina tells him to act very confident. The man asks for the registration of the vehicle and she says that she doesn’t know where it is. The man asks if it is his vehicle and Kip says no; that it’s his friend Greg’s. Marina comes over to the window and says that he has cancer and will probably die; he also says he’ll meet Usher. The cop says that Usher is touring somewhere far away and doesn’t believe him, he then asks if he knows Robbie and Kip then mentions that he’s close with him. The cop lets them off the hook but tells them they can’t drive the car; they ask if he can drive them to the drug store and the cop agrees.

Mackenzie is talking to her mother about her dad; she believes that her dad is a little crazy and should see someone about it, her mom tells her that her dad is upset she divorced her husband Steve that he liked a lot. Buzz, his grandfather, Robbie and David have brought a bunch of goats over to the other camp that’s been shooting the golf balls into their lake. During a speech conference they release a bunch of goats into the conference. They all walk away and see Sarah; she got a job at this other camp to get away from Robbie. She points them to a safe place to leave so they don’t get caught and they run.

The cop drops them off at the drug store and the cop tells Kip that he will beat his cancer. The drug store is closed and Kip knocks on the glass asking for the clerk let him in; Marina says it’s an emergency and the employee is rude to them. It starts raining and they have no where to go, Kip offers that they can stay at a hotel over the night because he won $500 playing darts. They get a hotel room and they take some alcohol and chocolate from the fridge; Mackenzie is going to bed and tells her parents goodnight. her mother tells her dad that Mackenzie is sleeping Roger and he gets pissed off and leaves. Kip and Marina are watching TV in bed; they turn it off and decide to sleep. She says that she knows they had a nice moment before, but she feels very happy being their with him. Kip makes it clear that his hands are staying above the covers and wont do anything; she says thank you for today and he makes it out as no problem. Marina then says that she is terrified, she mentions how her mom was her age when she got pregnant. Kip says it’s going to be okay, she rolls over and faces the other way.

Buzz’s grandfather sits on a bench and it breaks under him, he gets pissed off. Mackenzie asks how this prank war started and David says that her father started it all; her dad comes up and asks wen phase two is. Robbie, Buzz, his grandfather and David are moving in again. Buzz’s grandfather rides a horse out of the barn, David and Buzz are met by Roger. Robbie walks into the gym and sees Sarah working there, he asks why she ran away. She said because she wanted to, Robbie then asks if he didn’t catch her then would she keep cheating on him; she says sorry and he doesn’t believe it at all. Roger says he’s not happy about them taking his horse, David then tells Roger that he has no chance on Mackenzie. Roger then starts making fun of David about liking her; he says that he hit that and mentions she came back for seconds; David walks off. Roger then adds if his horse isn’t found he will pound him into paper.

Mackenzie sees her dad and says he’s too old to be pranking; he calls her Carine and Buzz wonders if he’s alright. Roger walks up and asks where the hell is his horse.

Kip and Marina are in the drug store and a guy comes in robbing the store while pointing a gun at Kip.

Kip and Marina are on the ground and they are robbed; they take all of Kip’s money. The guys find her pregnancy test and then they tell Kip he should have had protection, she mentions it’s Greg’s and the robbers start getting pissed at that. They tell Kip he’s a good guy, they get back to robbing the store and wish them luck.

Mackenzie asks where Rogers horse is, he’s trying to think it through. He just can’t remember where he put the horse and says he’s sorry. Robbie then tells David about what happened between him and Sarah; David slaps him in the face and tells him to stop being a little bitch. He slaps him again and repeats for him to move on; they go to find the stupid horse.

Buzz is walking with Grace and says getting old looks like it sucks; Grace says she can’t wait because she can then yell at people. Buzz and Grace find the horse; she tells Buzz to be quiet because horses get scared easily. They start walking over and Buzz burps scaring off the horse; Mackenzie is looking for the horse with Roger and she mentions how much he loved it. She then believes that her father may have Alzheimer’s, Roger says she should take him to the doctor and tell him how much she loves him every day.

He gets all sappy and cheesy with Mackenzie ; Buzz and Grace ride the horse to them and Roger is all over his horse and thanks them so much with a big hug. Kip and Marina are walking back to the camp; Marina is complaining and Kip is getting a little annoyed. She tells Kip to tell her why he’s getting upset, she asks why she had sex with Greg; she says she makes horrible choices and thinks she’s an idiot. She decides to go take the pregnancy test right there and Kip says that he loves her no matter if she’s pregnant or not. He even asks her to marry him, she tells him that he’s the best person she ever met.

Kip is waiting around and Marina says that she isn’t pregnant; she grabs his hand and they walk back. Mackenzie is with her dad and she believes it’s time for him to see a specialist; she says she loves him. He says it can’t be easy running the place by her self; but believes the kids are having the best summer of their lives. They hug and she leaves him on the dock, there’s a festival at the camp with many kids running around. David meets Roger on the dock and then asks about his Alasak resort; Roger asks him if he wants to work with him. Kip and Marina kiss, she questions his proposal; Kip just remembered Greg’s car and they laugh about it. Buzz’s grandfather tells him that the harvest moon got it’s name because the farmers in the day gave the farmers light at the night helping them harvest.