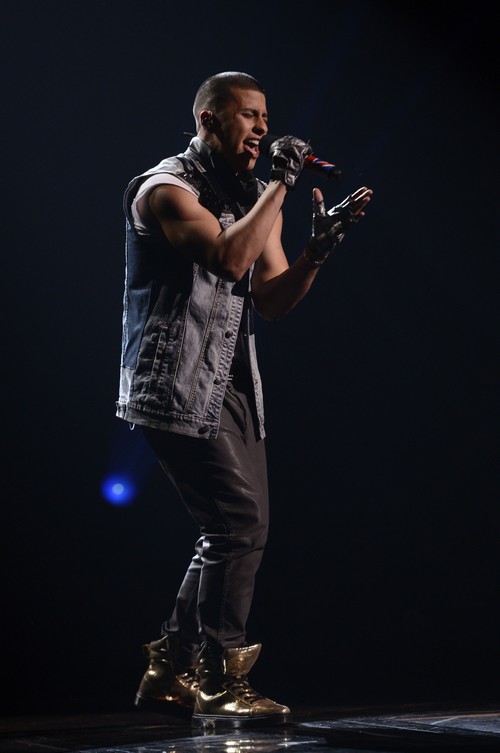 Carlito Olivero took the stage  on THE X FACTOR USA for his Top 6 live performance and Diva Week.  Carlito Olivero sang “Stand By Me”  by Ben E. King for his second song. On tonight’s show the top 6 performed live in front of coaches Simon Cowell, Kelly Rowland, Demi Lovato and Paulina Rubio for America’s vote and to make it to the coveted “Top 5.”  Did you watch tonight’s performance show? We did and we recapped it here for you.

Judges’ comments:  Kelly says that was actually the best vocal she has heard from him the whole competition, Demi says she wish there was not so much music in the background; she felt his voice was so amazing and loved his Spanish. Simon says that it was much better than the first song and would be upset to lose him. Paulina says that they will not lose him; that song was great and loves him. If you want to see Carlito Olivero make it another week, you have to vote for him.

On last week’s show Carlito Olivero performed “La Copa de la Vida”  by Ricky Martin. – Kelly said, “It finally looked like you were having fun.  You were not in your head, you just let yourself free.  Do it even more.”  Demi said, “That  was amazing and probably by far my favorite performances you have ever performed.  You have a real place in the market.  Paulina nailed it – you need to stick to this.”  Simon said,  “After a few weeks of dodgy performances you now showed us you are a great performer.  It takes guts to come back fighting and I am proud of  you.”  Paulina said, “I love the way you have been performing.  I love the advice Simon gave you last week.  I love you.”