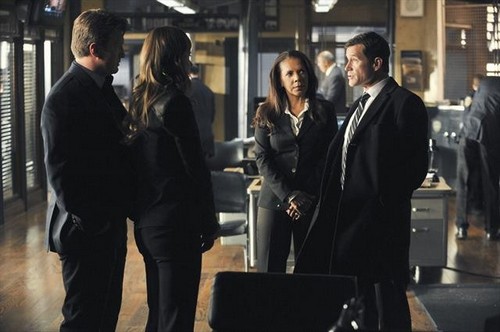 Tonight on ABC their hit crime drama CASTLE returns with a new episode called “Target.” On tonight’s show in a special two-episode story arc, Castle & Beckett start a murder investigation that also exposes a kidnapping plot. Did you watch last week’s episode? We did and we recapped it here for you!

On last week’s show Castle & Beckett got an up-close-and-personal view of a “Real Housewives”-esque reality TV series, “The Wives of Wall Street,” when they investigated the murder of the show’s rising young star. Meanwhile, Castle’s attempt to give Beckett a Valentine’s Day gift went horribly wrong.

On tonight’s show in the first of a two-episode story arc, Castle & Beckett begin a murder investigation that also exposes a plot to kidnap the daughter of a wealthy Middle Eastern businessman. Dylan Walsh (“Nip/Tuck”) guest stars as FBI Agent Harris, an even-keeled professional brought in to help find the kidnappers. 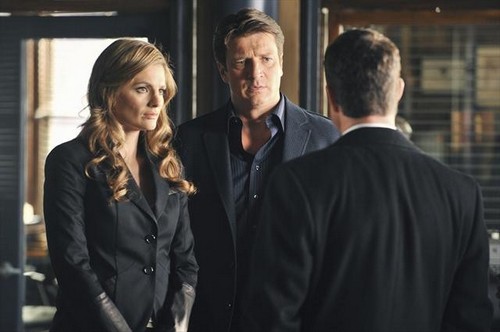 RECAP: Some guy is shooting at a van, then gets run over by it. At home, Castle’s mother is making pancakes for breakfast and they are terrible according to him. Castle realizes that his mom made the pancakes because she misses Alexis.

Castle is with Becket on the scene where the guy got run over the truck, his name is Hasim Farouque. A homeless guy witnessed what happened and said that Hasim was shooting straight on at the van. Assault charges were filed against Hasim two days go by Bram Stoker. Castle and Becket meet up with Stoker and he claims to not have killed Hasim, he filed the charge to protect himself. Hasim was his student and told Stoker that if he didn’t stop being over familiar with female students he would kill him. Becket wants a list of all the girls that Stoker flirted with.

Hasim started in school as freshman at age 24, in his apartment he has a lot of workout gear and it’s a very nice place. Get this, there is a state of the art surveillance camera and lots of weapons. Castle finds out that he was in the Suadi forces, Castle on the other hand finds out that he was funded by the Saudi government. Hasim was monitoring Sara El-Mazri, a fellow student that Stoker was flirting with.

Traffic cam footage shows the van that took out Hasim, Sara was abducted in the van and Hasim was trying to stop them. Hasim was monitoring Sara and taking two classes that she was in, Castle is thinking that maybe he was stalking her.

Sara’s father and mother, Mr. and Mrs. Al-Mazri are at the station and they want to pay whatever they have to in order to get their daughter back. It turns out, Hasim was hired by Sara’s parents as a body guard to protect her.

Castle can’t imagine what Sara’s parents are going through, but Becket is not getting it. Ryan interviewed Sara’s room mate, the only thing he got from her is that Sara went to a science exhibit and she was with a red haired woman, Alexis. When Castle tries to call Alexis from the exhibit hall, her phone is ringing in the hall, it is in the loss and found. Castle now knows without a doubt that “they” took Alexis as well.

Alexis attended the event with Sara and nobody has seen or heard from either of them since. The department thinks that Alexis int he wrong place at the wrong time. Roger Henson is a narcotics smuggler and they think he was responsible for the kidnapping, thing is, it won’t be easy to find him because he is a career criminal. The worry is that Sara’s kidnapping was not for money, but for revenge because Al-Mazri had some very powerful enemies. Castle is clearly and understandably upset, Gates tells Becket to do “whatever” she can to get Castle’s daughter back. Castle is at home with his mom, the phone is tapped and they are waiting for a phone call from the kidnappers.

Castle is watching a video that Alexis posted about Dr. Posner and the exhibit, she mentions that she is friends with Sara; that is where the kidnappers made the connection between the two.

Ryan has something and tells Becket, Castle overhears something is up over the phone, but Becket tells him she has to go and won’t tell him anything about it. It turns out that the van was found and Castle finds out on his own and heads on down there to find out that there is a lot of blood inside the van and Castle is freaking out.  The blood is b negative, it’s not Alexis’ blood.

Alexis and Sara are alive, they were both drugged but now are awake. Sara reveals to Alexis that her parents are crazy rich and will pay anything to get them released, Alexis reveals that  her dad works with the police and will find them. Alexis finds a room, it looks like a bathroom and has clothes and towels, then someone slips food under the door; they are taking care of them.

The blood belonged to the driver, when Hasim shot him. Becket tracks down the guy who was driving the van, Douglas Stevens, they know they have their guy because his sister is a nurse and he called in sick. At Stevens’ apartment, they find him and he has a bandage on his chest.

Becket gets right down to it, she wants to know everything or he is going to go down for the whole thing. Stevens won’t say anything, Castle wants a moment alone with him and tells him that he will do whatever it takes to get his daughter and her friend back. Stevens warns that if Castle touches him he will press charges, but Castle doesn’t care. Stevens is breaking under Castle’s pressure, we hear screams, guess Castle got what he wanted.

It turns out that the girls are at a farm and the FBI are headed there, Castle is going to have to wait it out.

The FBI are at the farm and the girls know that something is up because Sara overhears someone talk in Arabic that they have visitors. Gates gets a call, the farmhouse is empty, Alexis and Sara were not there.

The girls are fine, Alexa is trying to pick the lock to the door, she does it and the girls can get out of the room. Sara is scared, but Alexis reminds her they “they” want them alive and the best thing to do is split up, so at least one of them gets out and alerts the authorities. Alexis finds a cell phone and dials her dad’s phone, he answers and is surprised to get a video message of Alexis – people are coming, she has to run and drop the phone. The police are trying to track the phone as Alexis makes a run for it, she gets outside and she sees the Eiffel Tower, she is in Paris, France just when she is about to scream for help, someone grabs her and covers her mouth so she can’t scream. The police are able to track the phone, Castle knows that Alexis is in France.