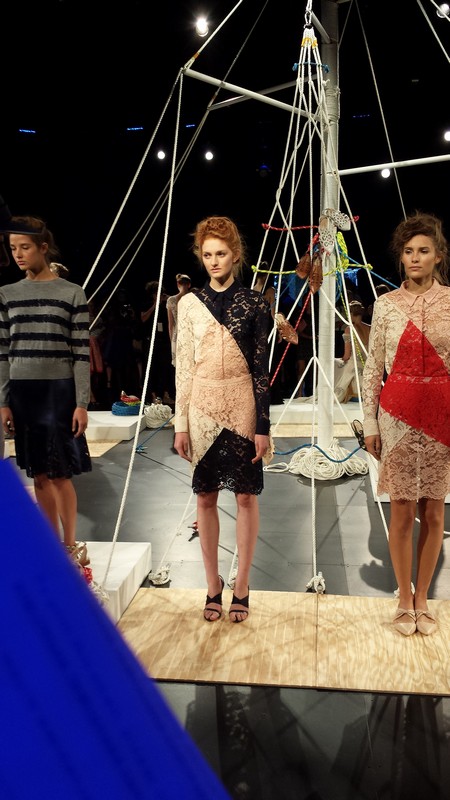 Celeb Dirty Laundry was honored to be invited to the CANDELA Spring 2014 Show which was held at The Box At Lincoln Center.  I have to say if Candela wanted go for a Katherine Hepburn’s summer on yacht then they definitely were able to pull it off. That’s how I felt walking among feminine and Amazonian women. They pulled off sailing with just the right dash of the 1940’s glamour.

At first it was odd as newcomer myself to get to too close. I feared I might disturb the exhibit but you want to and your whole purpose is to see the clothes. If there’s any awkwardness then may I suggest offering the models some bottled water. Despite the clamoring bodies pushing to view every detail and stitching; this is not the zoo. There aren’t any posters put up that say anything remotely like “Don’t feed the Animals”. These are women after all. Skinner then I and most other will ever hope to be but they knew the exact moment eyes were zoomed in on them alone. When that time came they made sure to work the dress and give some of the best east coast Wasp face.

No wonder I thought “Philadelphia Story” or it could have been inner desires projecting themselves. Either way I saw light, fun, and a demure kind of sexy.  It didn’t matter if was a gown or seemingly men shorts on women precariously held only by a belt. It held your attention. It took the risk of portraying a confident lady without the usual flash of way too much skin. They instead gave a new twist on the classic leaving everyone else to create a love child of David Bowie and Marie Antoinette.

Eventually the others will realize that look is completely stale. Lady Gaga has been there and done that. Candela in the other hand is rare this season for giving something fresh! It makes wonder what else is up their sleeve.