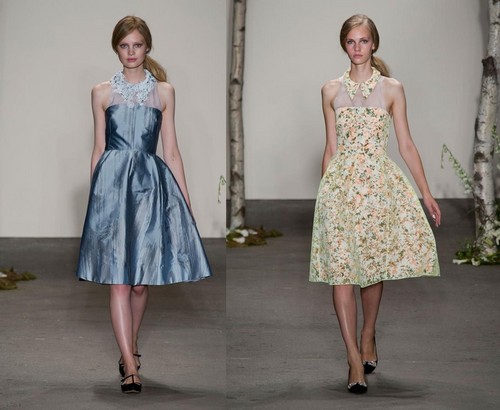 Apparently there was a lot of talk that Honor’s designer Giovanna Randall wanting to add a darker element to her Spring line and I’m sorry her inner sweetness must have just spilled over. It wasn’t rock. There’ wasn’t punk or grunge. It was an abundance of soft femininity straight out puritan era with shorter skirts and pants. It may not be what she was aiming for but I sure liked it.

Set in a woodland forest, We watched an strange appealing mash-up of Puritan and Fey; two things that in a normal universe shouldn’t work yet surprisingly did. They were bright flower patterns. Sometimes the flowers were 3D and sometimes they appeared Neon but almost all were done in a button up to the neck fashion. It was spring. Bright and colorful to be removed from winter colors but in pastels so they don’t get confused with summer.

If there’s any doubt Giovanna played it too safe then here you can be proven wrong. This isn’t what you expect to see on Kate Middleton. That’s too safe while the Spring Collection was more out there. It was simply a moment at the end where anyone could stand and shout “Finally someone has put Lace into good use”. In truth I was getting tired of it being compared to Grandma’s tablecloth.

Did the show capture my interest? Yes. Then again I’ve always been a sucker for capes. To me no collection is completely without making a cape. I love what Honor did this year although I don’t think I can wear one feathery frock even if I tried. Sometimes Haute Couture doesn’t translate as much we would wish. That’s why we leave to the models.