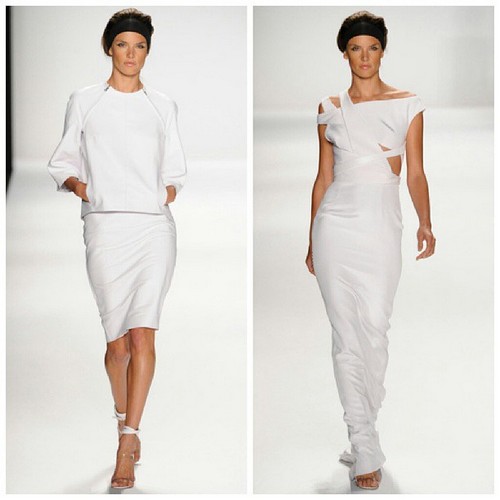 Ken Kaufman and Isaac Franco have become one of the most beloved Hollywood design teams in recent years. Jennifer Aniston leads the pack of A-List actresses that often turn up on the red carpet in an original KaufmanFranco design and let me tell you, Lincoln Center’s largest theater space was absolutely jammed as the 2014 Spring collection was unveiled on Monday night.

As for KaufmanFranco’s latest designs were sharp in either optic white, red or neutral tones. The bandage dresses covered  from the neck to floor with strategic strips of fabric forming strategic criss-crosses to expose just a hint of skin.

There was sharply tailored outerwear that included a white trench coat that I would kill just to try on and a red fitted dress that was slit to there that moved absolutely perfect as the model walked. The fitted pieces were followed by some flowing designs that looked stunning. It’s all about the movement folks. You can bury a woman in miles of silk as long as it drapes and moves well and KaufmanFranco’s spring beauties did just that.

The least wearable but maybe most visually stunning were a series of black sheer dresses. My favorite’s featured sculpted lace sheathes that appeared to give total coverage until you took a better look. The detail on KaufmanFranco’s barely there dresses was absolutely beautiful.

All in all it was another fantastic collection on full display during Mercedes Benz Fashion Week as it continues to take over Lincoln Center in New York City. Check out some of the looks from KaufmanFranco’s collection below and tell us your thoughts.