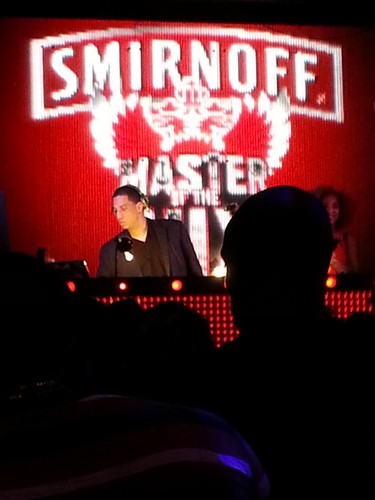 Last night in New York City celebrating the season 3 premiere of Master of the Mix, SMIRNOFF Vodka and VH1 hosted a launch party at Club Marquee and Celeb Dirty Laundry was thrilled to be there.

Hosted by Smirnoff at the Marquee NY Club, the audience not only got to see the full cast but also hear from the Celebs. The Guest list included: Grammy Award-winning producer and legendary DJ Kid Capri; Top NY DJ dubbed one of “The New Club Kids” by the NY Times Mia Moretti; president of Artist Publishing Group Ben Maddahi; Bartender Jenny Costa, and many more.   Also at the party was fashion designer Christian Siriano, which took all my constraint not to run up to him and say thank you for my favorite pumps.  Nevertheless despite a quick geek moment there was the MC who was none other than DJ Amanda Seales. Excited and occasionally going behind the booth and giving it a try, Ms. Seales at one point jokily asked if she had lost her crowd to the Smirnoff signature drinks.

Oh yeah, they were that good. The four signature drinks, Vinyl Collection, Open Format, The Mix and The Backspin, were supposed to symbolize certain challenges from the VH1 reality show, Master of the Mix.

Although the official kick off was the promo of the upcoming season 3 of the hit show, Master Of The Mix the night only got going when DJ Mia Moretti and Caitlin Moe took the stage with their blend of top 40s and Pop violin.  As the night build up and the Marquee became packed there was only one thing left that could and did make it better. Two words…Kid Capri!!!

The famous DJ’s playlist consisted of an ode to New York. However it wasn’t until he played Biggie, a man he honored by asking the audience to put a finger in the air in tribute, that he reminded a lot of the natives that this night was representation for more than Master of the Mix, the Marquee, or even Smirnoff. No the night was representation of the Music.

People have forgotten to make the talent speak for itself. For instance there are certain “artists” who feel they are above the law and use their extreme antics to bring in the crowd. What they don’t realize is the reason people tune in to The Voice, American Idol, or Master of the Mix is we want the Music from the get go and not the theatrics.

So a big thank you SMIRNOFF Vodka and VH1 for hosting a fabulous season 3 launch of Master of The Mix at Club Marquee.