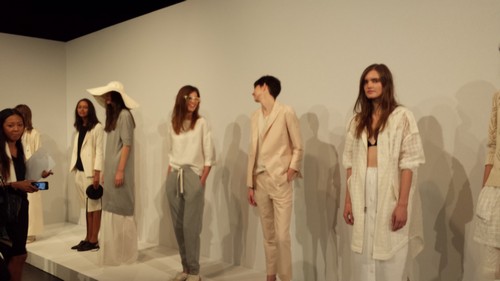 Celeb Dirty Laundry was honored to be invited to the Steven Alan Spring 2013 Women’s Presentation held September 10th at The Box at Lincoln Center, NYC.  One of the great things about a Box Presentation is that the viewer is able to see everything all at once. For Steven Alan’s Spring 2013 show at NYFW that wasn’t particularly necessary and yet it allowed nothing to be taken out of context. One piece by itself and you’re thinking casual but all together and anyone could see a light preppy casual wear with easy flowing lines.

Unlike his contemporaries, this spring line refused to highlight the bright and sometimes overpowering colors generally associated with spring. It was kept neutral in whites, beige’s, and grays. Admittedly these colors aren’t the usual and as a mater of fact I personally didn’t know if it was OK to wear them so early in the year. My assumption would have been mid-Spring at the very least before I turned to wearing white much less off-white.

Although I do find it great to stick out. Everyone who happens to decide on something floral and/or neon this spring could almost look like there were trying too hard next to these creations. That is until Miley Cyrus puts something on of his on. As we’ve already notice she thought she could rock a onesie pajama and so I would hate to see her wear a Steven Pajama Casual Wear. For many who will not think it, you can hear it from me, Miley can and will lower the value of the product. And it  is a great product. It’s almost unisex in design the way the clothes can add to woman but have feel of once belonging to her boyfriend’s closet. Love It!

To be honest we’ve all been little thieves at heart and now we don’t even have to “borrow”.  Steven Alan went and saved us the trouble! Don’t miss the opportunity to stop by one his many boutiques to form your own opinion. We’ve only seen his Spring but just imagine what else he has up his sleeve.