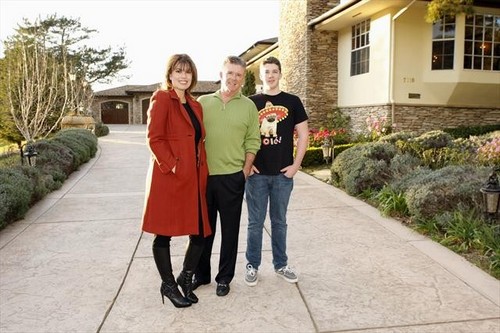 Tonight on ABC Celebrity Wife Swap returns again for a whole new episode.  On tonight’s show Actor Alan Thicke and Comedian Gilbert Gottfried swap lives.  Did you watch last week’s episode when Rapper Coolio and Rockstar Mark McGrath  swapped lives?  We did and we recapped it here for you.

Alan Thicke is probably best known to television viewers as Dr. Jason Seaver, a role he played on the family sitcom “Growing Pains.” He and his wife, Tanya, live on a sprawling ranch in Santa Barbara, CA with Alan’s 15-year-old son, Carter, where they enjoy the finer things in life. Tanya loves to throw lavish dinner parties with the help of a large staff that tends to all of the household needs.

Gilbert Gottfried lives in New York City with his wife, Dara, and their two children, Lilly (5) and Max (3). When Gilbert isn’t doing stand-up comedy or voice over work, he’s a notorious penny-pincher who likes to save money by shopping at .99 cent stores. He also walks all around the city, not wanting to waste money on cab, subway or bus fare. Dara is accustomed to Gilbert’s frugal ways and believes you don’t need to spend a lot of money on those you love just to show you care.

Alan Thicke is on tonight’s show along with his wife Tanya.  She is your typical high maintenance chick that expects to have everything handed to her. Gilbert Gottfried is the other celeb and his wife Darais fabulous. They are a practical couple that seem to really love each other. Alan thinks it’s heroic that Dara has stayed with Gilbert. Meanwhile Tanya informs Gilbert that if they ever had sex he would end up in the hospital.

Tanya is struggling to fit in at the Gottfried home. Gilbert makes her get up 3 hours early and then wants to take her to the 99 cent store to celebrate his anniversary with Dara. In Santa Barbara wakes Dara at 10am with coffee and a magazine.  Tanya does go to the store and manages to drop over 200 bucks. He then takes her to wait for a few hours to try and get free Broadway tickets.  He then takes her to the Friar’s Club- so that they could eat in the kitchen.

Once the ladies take over its a totally different ballgame. Dara has Alan and his son doing all the chores because she has given their staff a week off. Meanwhile Tanya insists that Gilbert have a dinner party to spend time with his friends. He has a good time but hates that he spent a fortune.

Dara dares Alan to show his love for Tanya in a unique way, by only spending a dollar. He ends up getting her a kiss me balloon and somehow she thinks that she’ll appreciate it.  She makes the family stay home and just spend time together. They actually truly enjoy the bonding time. Meanwhile Gilbert takes Tanya to dinner and has a serious conversation.

Finally the couples are reunited and Tanya describes her time with Gilbert. Alan is a pompous idiot and thanks Gilbert for making him look so good. In a surprise outburst Tanya freaks out and tells Alan that if he thinks he proves his love by buying jewelry then he can have it all back.  He gives her the balloon and she really appreciates it. At the same time Dara wants to have a party now and then.  Both couples say that the experience has made them appreciate what they have at home.