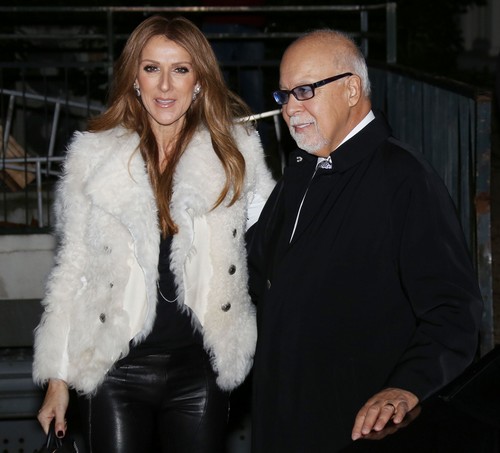 When Celine Dion’s Mother, Terese ‘Maman’ Dion, introduced her 12-year-old daughter to Rene Angelil back in the early-80’s she never in a million years thought that her daughter would marry the man who had already been married twice and had three kids. In fact she fought tooth and nail to prevent the marriage but her efforts obviously failed. Now 18 years after walking down the aisle it appears that Celine and Rene’s marriage is taking its last breath.  Will their long relationship end in legal separation and divorce – is this another Courtney Stoddard and Doug Hutchison type of deal – after all, Rene is 26 years Celine’s senior!  While he is now an old man she is still a young woman – think about it.

According to the Nov. 25th print edition of National Enquirer when the couple was spotted together in NYC recently their was a clear chill in the air. Celine looked like someone had died and Rene was walking behind her rather than close by as we’re so accustomed to seeing him. Celine also had her wedding ring off for the first time ever in public.

She has talked in recent years about how hard it has been to keep the marriage together, especially with him also managing her career. When they butt heads over work it often carries over into their personal lives and that’s ultimately toxic for any relationship. Sources are shocked that the couple has kept it together for this long. Their is over a 25 year age difference between them which means their interests aren’t always in line. When you combine that with work stress and admittedly not the best communication skills, well, that’s a marriage in trouble. Will Celine and Rene repair things yet again or is her missing ring a sign of the status of their faltering marriage? Tell us your thoughts in the comments below!