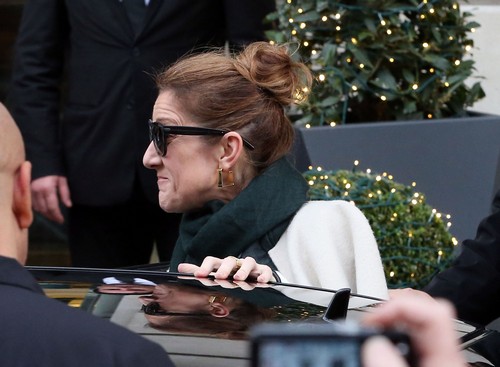 Last week Celine Dion was spotted out all by herself in Paris looking like someone had died, continuing the rampant speculation that her and Rene Angelil’s marriage is all over but the crying. The couple was last spotted together a few weeks ago and their demeanor was hinting at serious trouble. Plus Celine has taken off her wedding ring which is thought to be a tell-tale sign that this is a couple on the brink.

So here we are a week later and Celine is still currently in Paris, now joined by her three young sons but there is still no sign of Rene. The singer has been playing some European dates and enjoying the city in her time off. On Wednesday she and her boys were spotted out hitting up some local shops and running to a Parisian bakery for treats. In their 18 years of marriage Rene has always appeared at his wife’s side as a doting husband and protective manager, at least up until these last few weeks.

Celine has talked in the past of the couple having had communication breakdowns that brought them to the brink of a split but then they always found a way to fix things and work it all out. Do you think that we are seeing a similar type of rift now or does this one seem to run deeper? Does this look like a couple that can reconnect and patch things up to you? From the look on Celine’s face I can’t even say that I’m convinced that she would care to try and salvage her marriage again. Is it over? Tell us your thoughts in the comments below!

Celine still alone on Dec 1 in Paris – She and Rene are split for sure – look at how terrible Celine looks!