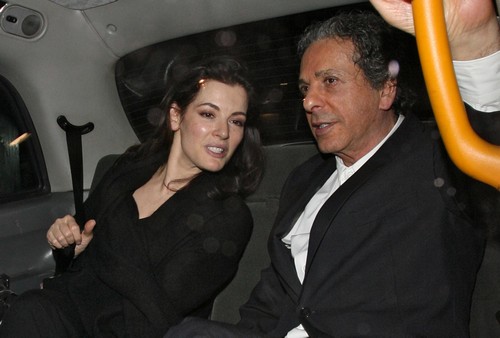 The marriage is over! Millionaire art collector and wife beater Charles Saatchi has announced he has made the “heartbreaking” (my butt) decision to divorce TV chef Nigella Lawson after pictures showed him holding her by the throat as they had an argument on a restaurant terrace.

This all began when the British police confirmed they are looking into pictures which show the celebrity chef Lawson being physically restrained by her husband, Mr. Saatchi. The photographs of the incident published on the net show the art collector with his hand around Lawson’s neck as the pair sit on the terrace outside Scott’s in Mayfair, central London.

The art tycoon was questioned by police for five hours before being released – he had earlier insisted he did not hurt the TV chef when he lunged at her four times, despite pictures that showed her looking distressed, weeping and in clear pain, The Daily Mirror reports.

Nigella Lawson should have ran to the divorce lawyer and drew up the paperwork to divorce his sorry-ass of a husband. Surprise–Surprise now Mr. Saatchi has filed for divorce! TMZ is reporting that Mr. Saatchi stated “I feel that I have clearly been a disappointment to Nigella during the last year or so, and I am disappointed that she was advised to make no public comment to explain that I abhor violence of any kind against women, and have never abused her physically in any way.”

The FACTS are he choked her in public and I hope Nigella is not having it and does not go back. She should not be interested in an abusive a**hole and this relationship should be over. If you are willing to abuse me in public than there is no telling what you are willing to do in private, right? Let’s do this and get this divorce over. Share your thoughts should they get a divorce? Should she stay to save her marriage?