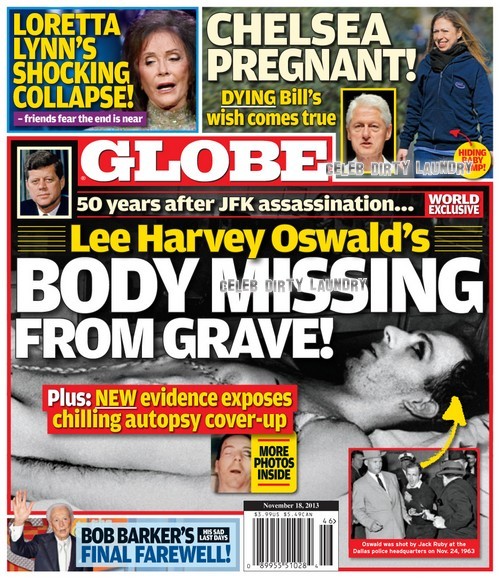 It looks like after months and months of trying, Chelsea Clinton is finally going to be a mother. She and husband, Marc Mezvinsky have been struggling with infertility if you listen to the whispers close to the Clinton family and adoption was something that was seriously being kicked around until Chelsea received the good news. According to the Nov. 11th print edition of GLOBE Magazine Chelsea has long feared the loss of her father, Bill Clinton and was almost in a panic thinking that the clock was ticking and that she needed to give him a grandchild. Bill himself gave an interview last year where he mentioned an overwhelming need to stay alive long enough to enjoy grandchildren and that he appreciates his time so much more now that he is older. No doubt a variety of health scares have also helped him to realize just how short and precious life is!

JFK’s assassination is one of those historical events that has never really been put to rest for one reason or another. Now, 50 years later there are reports that Lee Harvey Oswald’s body is missing from its’ grave. Also, according to the Nov. 18th print edition of GLOBE there seems to be new information that supports the notion of a cover up surrounding the autopsy done on Oswald’s corpse.

Loretta Lynn has been working non-stop for her entire career and it seems that such an active pace is finally catching up with the aging singer. She recently collapsed and now those closest to her are fearing that if Loretta doesn’t take it as a sign that her body needs to slow down then more health issues will be right around the corner. GLOBE also tells us about Bob Barker’s final farewell. The price is always right with good old Bob.

GLOBE covers Hollywood, politics, soaps and those royals like no other news magazine. No matter who it is or what happens count on GLOBE to reveal the story with all the details that others fear to expose.  Grab yourself this week’s copy from the newsstand today and in the meantime tell us your thoughts on Chelsea’s pregnancy in the comments below!