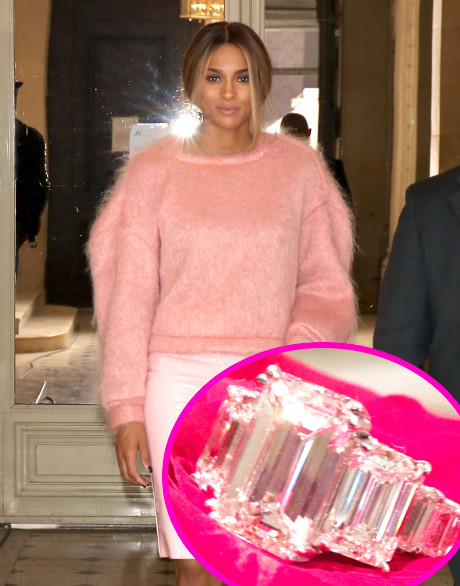 Kim Kardashian is not the only one getting married. R&B singer Ciara (and one of Kim’s closest friends) also just got engaged. And the two proposals are eerily similar to each other. Ciara was in NYC celebrating her 28th birthday when her rapper/music producer boyfriend, Future, popped the question.

After she said yes, she Tweeted her excitement. “Today Has 2 Be Like One Of The Sweetest Days Of My Life! #TheBestBirthdayEver. If I’m Dreaming I Don’t Want To Wake Up..Aaaaaahhh!!!”

Its very coincidental that the two friends both got engagement rings as birthday presents. They are also both marrying rappers. But that’s not where it ends. Future gave Ciara a 15-carat diamond. Sound familiar? Kanye gave Kim a 15-carat Lorraine Schwartz diamond. The only difference is Ciara’s new bling is by Avionne & Co.

I find it really strange that these engagements between friends would occur just weeks apart and be so similar. Future apparently doesn’t live up to his name because, if he did, he would be more original and creative. Ciara has not seen the same level of success she achieved when she first came on the scene in 2004 and Future’s career is just beginning. It seems they may be riding the coattails of Kim and Kanye to gain a little attention.

In any case, Future and Ciara have been dating for about a year and, according to Future, the engagement has been a long-time coming.

“I don’t get into nothing to get out. We haven’t set a date. This the one. I said it before, I said it seven years ago [on a video shoot], so for it to come around and happen, it was just meant to be,” he said in a recent interview with Hot 97.

He clearly had enough time to plan a special and memorable proposal. We wish them nothing but the best and hope they get their happy ever after. What are your thoughts on this engagement? Did they copy Kim or Kanye or is it just an odd coincidence?