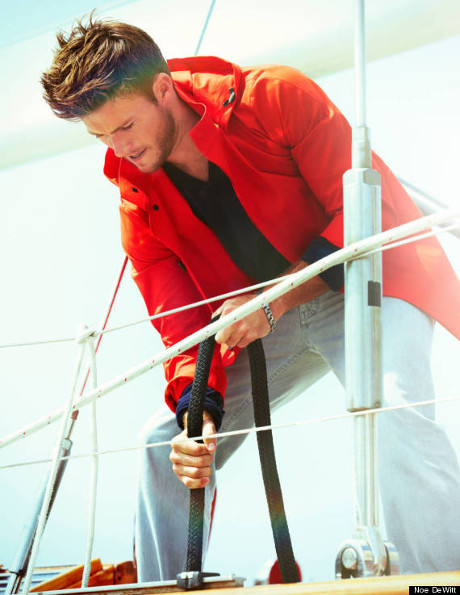 In the accompanying interview, Scott opens up about his desire to become a ‘man’s man’ and a ‘no bullsh** leading man’. He explains, “I want to be a man’s man — not a kid actor or a glitzy pop star but a no-bulls–t leading man.”

Scott already has several high-profile films lined up, including Fury with Brad Pitt and Shia Labeouf, so he’s clearly well on his way to achieving his goals. However, one might wonder what took Scott so long to get here, considering his father’s pedigree and his own good looks.

Scott explains that at 27 years old, he feels that he is now mature enough to start acting, whereas he spend the earlier part of his 20s having life experiences – working as a construction worker, a valet, and a bartender. He says, “As a director and an actor, my dad’s motto is ‘Tell the truth.’ The only way of doing that is having life experiences and being a storyteller.”

I have a feeling we’ll be seeing a lot of Scott in the next few years, and frankly, I doubt anyone will be complaining about that. He seems dead set on establishing himself as an actor first, and a celebrity second. He’s also going out of his way to follow in his father’s footsteps, which will probably help in landing roles.

What do you guys think of Scott Eastwood as a leading man? Is he better or worse than our current crop of leading men? Let us know your thoughts in the comments. Also, what do you think about the Scott Eastwood Town and Country photo shoot?