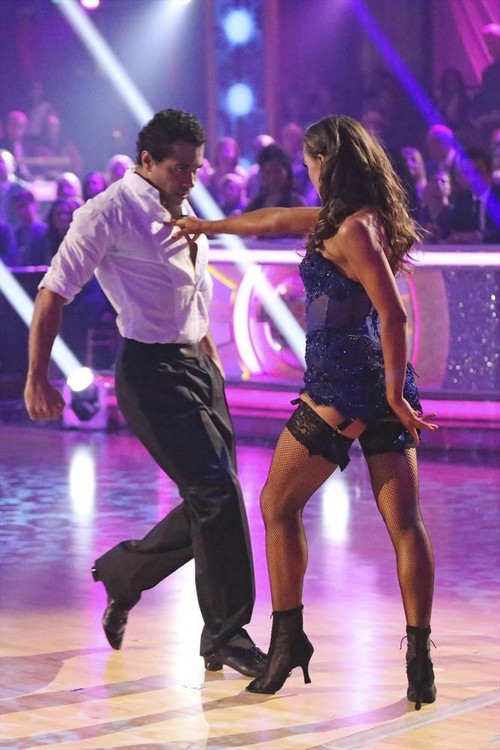 On tonight’s episode 9 of Dancing With The Stars the couples competed in two rounds of dance.  For her first round Corbin Bleu danced a Quickstep for a dance style she had not previously performed.  Check out Corbin’s DWTS bio [CLICK HERE. If you missed tonight’s show you can read a full and detailed recap, right here.

On last week’s show Corbin was given a 27/30 for his Argentine Tango. Carrie Anne said about his performance, “Last week you brought your A game and once again you have done it, the lifts took my breath away, but just watch your footwork.”  If you missed any of last week’s performances, you can check out all the videos, right HERE.

Corbin Bleu and professional dancer Karina Smirnoff: dancing an Waltz.  Karina tweeted this about their dances this week, “So excited 4 our dances! We have slow waltz and jazz! Love the music and where we r going with it! Thank u all 4 supporting us! We luv u!”

Judges comments: Carrie Ann “You both weren’t on your centers, you were a bit off.” Len “It is so expressive, it is like poetry in motion but I would have liked more in hold. Drive more on the heel in the slows, but a great number.” Bruno “I though that was enchanting, it was incredible, flawless musicality. It was breathtaking.”

Carrie Ann “That was maybe the best routine I have seen in seven seasons. You did what Bob Fosse would do today. It was such an amazing combination of great styles.” Len “You came out and exploded, it was delicious. The music, the routine, it was one fabulous hold.” Bruno “Grand master Corbin, the magnificent. You lived up to Bob Fosse, you keep his legacy alive.”