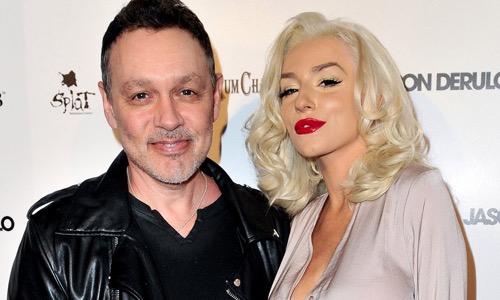 It looks like Courtney Stodden’s fun in London has come to a screeching halt with her being dragged home after several weeks of hard-partying after appearing on Big Brother UK. In case you didn’t already notice, Court’s father figure husband, Doug Hutchison looks none too happy with his wife. Rumor has it this marriage has totally crashed and burned, perhaps because of all the bruises on Courtney’s body that look like they were caused by being bent over a dumpster outside of a club by a guy, she’ll never remember.

Or maybe it was the photos that turned up online late last week that showed a sloshed Courtney managing to teeter in her shoes as everything else fell out of her dress. Then there was the rumor of the dirty bathroom sexcapade with some random guy who was most certainly not 53-year old Doug!

If all of these things didn’t smell of divorce then Doug’s body language sure does! He is always possessively clutching his wife when they are out together but now it looks like he sees her as the same 3 dollar whore that everyone else does. Courtney’s recent actions make it clear that she has no intention of returning home to live under her husband’s thumb like she once did. Instead, she has gotten a nice big taste of freedom and she’s not about to hand all of the control back over to Doug.

I have a feeling this is one of those splits that is going to get all kinds of 911 call messy, don’t you? Tell us your thoughts in the comments below!