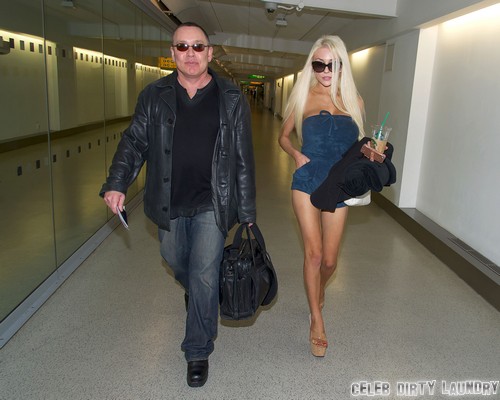 You know, there’s a lot to be said for Courtney Stodden. People ridicule her on the Internet, but why? Because she’s trapped in a weird dependent relationship with her creepy husband who took advantage of her when she was a very young girl? Because she’s been forced into the limelight when she’s clearly not suited to it? I mean, in reality, she’s probably just a sweet, albeit naive girl who was thrown into the Hollywood scene without any sort of preparation. You only need to look at her parents to see the type of family support she has – which is to say, pretty much non-existent.

According to our sources, Courtney was trying to get into famous Hollywood club Bootsy Bellows with her friends when they were turned away at the door without any explanation. Courtney was not with her husband or her parents, and she was just trying to have fun with several of her friends. Courtney and her friends were already approved on the guest list by the club’s publicist as well as the club manager and RSVP handler. However, without any explanation or reasoning, the woman at the front door refused to let Courtney or her friends in.

Now, the club doesn’t really have a reputation for being exclusively A-list only, like the Soho House or even Beverly Hilton. In fact, Bootsy Bellows is supposed to be open to the public, so it wasn’t even like Courtney was asking for special treatment. She and her friends just wanted to have a night out – but with this kind of discrimination, how on earth is she supposed to even attempt to be a normal girl her age?