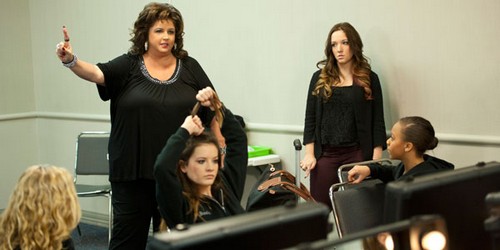 DANCE MOMS continues tonight on Lifetime with a whole new episode and it is the “Abby’s So Far This Season.” On tonight’s show Abby will sit down and discuss the season while recalling some major mom moments! If you missed the drama of last episode, we have your recap right here.

On last week’s episode after several months in Hollywood, Abby returned to the Abby Lee Dance Company to find her dancers had been slacking off…all except Maddie and Mackenzie. While she was gone, all the moms made a pact to turn down Abby’s invitation for their daughters to perform on national television. But Melissa eventually folded, causing a new rift between her and the other mothers. Meanwhile, Abby pitted Maddie against Chloe with two opposite solos: Tap versus Hip Hop. And now with Asia on the team, Mackenzie was forced to step up her game.

On tonight’s show in this all-new special, Abby Lee Miller gives her unique insight into this season of Dance Moms as she recaps major mom moments, crazy conflicts and the best dances. The reigning “diva of dance” will also share never-before-seen bonus scene footage and extended dances.

Tonight’s episode is going to be another drama packed one, which you won’t want to miss. So be sure to tune in for live coverage of Lifetime’s Dance Moms Season 4 “Abby’s So Far This Season” — tonight at 9PM EST.