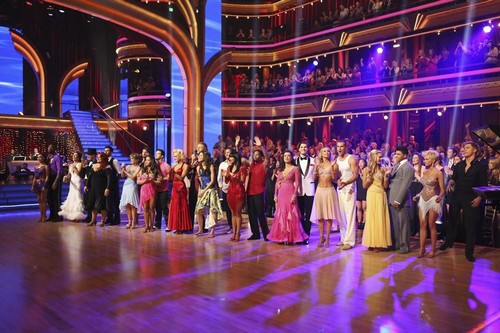 This week is an all new episode of DANCING WITH THE STARS 2013 season 16 and with that, we are bringing you some awesome SPOILERS! But we warn you, if you don’t want to know, then stop reading now!!!!

The competition heats up on Dancing With The Stars this week when the first couple faces elimination.  Last week the glitz, the glamour and the sparkle returned to the ballroom as season 16 of DWTS premiered.  A new cast of fresh faces hit the dance floor to impress the judges and America.  If you missed the premiere episode you can read our full and detailed recap here!

On this week’s show the couples will be fighting for their survival and performing a Jive, Quickstep or Jazz routine.  The Jazz is a new dance this season, the elements in the “Jazz” dance the judges will be looking for: jazz hands, kicks, leaps, rolled shoulders, quick turns and sideways shuffling.

The dance assignments for this week are: Kellie and Derek – Jazz; Victor and Lindsay – Jive; Ingo and Kym – Quickstep; Lisa and Gleb – Jive; Zendaya and Val – Jive; Sean and Peta – Jive; Aly and Mark – Quickstep; Dorothy and Tristan – Jive; Wynonna and Tony – Quickstep; Andy and Sharna – Jazz; DL and Cheryl – Quickstep and Jacoby and Karina – Jazz.

On Tuesday March 26th, 2013, one couple will face the first nail biting elimination on the season premiere of “Dancing with the Stars the Results Show” (9:00-10:01 p.m., ET). The show will feature a musical performance by signer Josh Groban, who is set to perform his current single, “Brave,” with an 18-piece band accompanied by “Dancing with the Stars” alumni Chelsie Hightower and Dmitry Chaplin. Adding to the excitement, acclaimed Swedish duo Icona Pop will perform their hit song, “I Love It.” The results show will feature a spectacular opening performance by this season’s pros and Troupe dancers.

Who do you think will be the first celebrity eliminated?  Hit the comments and let us know your thoughts.  Make sure to come back tomorrow for our live recap of Dancing With The Stars Season 16 episode 2 recap.