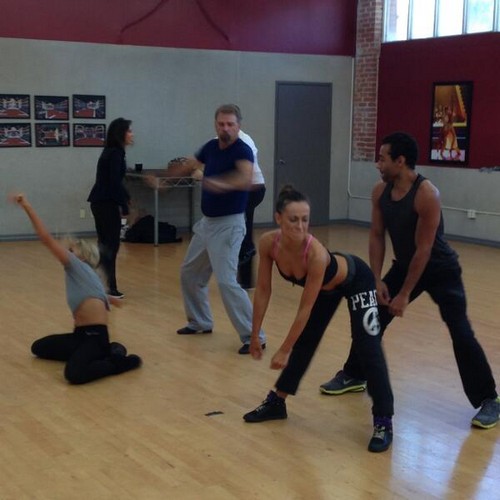 This week is an all new episode of DANCING WITH THE STARS season 17 and with that, we are bringing you some awesome SPOILERS! But we warn you, if you don’t want to know, then stop reading now!!!!

The competition heats up on Dancing With The Stars this week when another couple faces elimination.  Last week the glitz, the glamour and the sparkle returned to the ballroom and the celebs hit the dance floor to impress the judges and America.  If you missed the episode you can read our full and detailed recap here!

On this week’s show the couples will be fighting for their survival and performing a dance style they have not yet done as well as take part in the first ever “Switch-Up Challenge.”

The dance assignments for this week are: Bill and Emma – Tango, Leah and Tony – Quickstep, Amber and Derek – Samba, Brant and Peta – Tango, Snooki and Sasha – Foxtrot, Jack and Cheryl – Paso Doble, Elizabeth and Val – Cha Cha and Corbin and Karina – Viennese Waltz.

For the Switch-Up Challenge, it is a fresh take on a dance marathon, couples will compete side by side, in two rounds, with no prior knowledge of dance style or musical accompaniment. One by one, the judges will select couples to be tapped-off/removed from the dance floor. Extra judges’ points will be awarded to couples based on longevity.  The official DWTS twitter account tweeted the photo above with the tweet, “Monday, the couples will dance in two groups of four, to all different types of music in our Switch-Up Challenge!”

The show will also feature a spectacular opening number with the entire cast, choreographed by Lacey and Benji Schwimmer. Additionally, musical guest Ariana Grande and Mika will perform their hit duet “Popular.”  Ariana Grande will perform LIVE with Mika Sounds on the show too.  At the end of the night, one couple will face elimination.

Who do you think will be the next celebrity eliminated? Have you voted in our poll?  If you have not there is still time.  [CLICK HERE]   Make sure to come back later for our live recap of Dancing With The Stars Season 17 episode 6 recap.